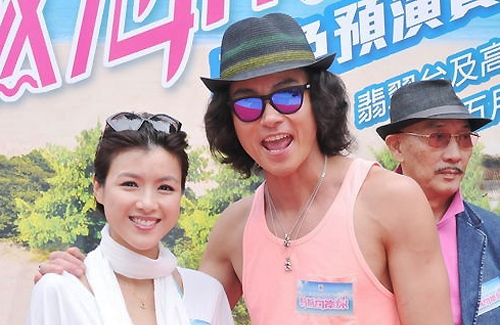 Despite the dismal performance of TVB’s recent productions, the cast of Slow Boat Home <情越海岸線> are enthusiastic and ready to kick off the summer season. Aimee Chan (陳茵媺), Raymond Wong (黃浩然), Selena Li (李詩韻) and Ruco Chan (陳展鵬) arrived in Cheung Chau to promote their upcoming romantic series today. Dressed in light summer outfits, the cast had a fun time on stage and mingled with local fans.

At the event, Aimee was asked to comment about boyfriend, Moses Chan’s (陳豪) recent purchase of a $33 million HKD residence. The actress was in a very good mood and laughed as she denied any knowledge about her boyfriend’s new home. Aimee admitted that Moses had mentioned shopping for a house, but emphasized that she does not take part in his finances. “Why would I manage his money? We’re not at that stage yet, I’ll need to be in a different [relationship] status to do so.”

Reporters then asked if Moses had proposed marriage. Aimee did not deny the claim and said, “I wouldn’t tell you either way, and you shouldn’t ask the girl!”

Speaking about her new summer drama, which replaces the time slot of the heavily criticized detective series Bullet Brain <神探高倫布>, Aimee felt that the series are completely different and should not be compared. She is also not too worried about the ratings and instead hopes for positive reviews. Aimee was also asked to discuss Moses’s poorly-rated drama Beauty at War <金枝慾孽貳>. She shared that she has been busy catching up on sleep after filming in Malaysia and has not yet seen the show. She promised to tune in to support her boyfriend and praised Moses as a consistent actor with high potential.

Raymond Wong, who has recently become a second-time father, shared that son Ransley will celebrate his first month birthday on Wednesday. Raymond plans to have a family dinner for the occasion, and stated he will not try for a daughter because he already has his hands full with his two beautiful sons.