Recently, singer Alfred Hui (許廷鏗) went to the radio station to promote his new song “Feebleness” <無力感>, and the radio host brought up Alfred’s rumored boyfriend Hubert Wu (胡鴻鈞), who is reportedly seeing Sisley Choi (蔡思貝) now. When the interviewer asked Alfred if Hubert heard his new song, Albert expressed, “I sent it to many of my friends, and he is not an exception. We haven’t spoken much lately, but I feel bad because I’m not that familiar with Sisley, yet she has to answer so many questions about me.”

He laughed and said he is just a reader following Hubert and Sisley’s relationship developments through the news. Smiling, Albert said, “I hope he will let me know, so I am not kept in the dark, but he rarely answers my messages.”

The singer added that he is not mad at Hubert for prioritizing romance over friendship. “I don’t think we are on bad terms,” Alfred expressed. “He told me he’d reach out to me after he handles some work-related stuff. I didn’t see him at Tang Siu Hau (鄧小巧) and Mag Lam‘s (林欣彤) music event earlier either. We haven’t contacted each other much lately.”

He continued, “I understand everyone has their own work troubles, but I will be worried if we lose contact. I don’t remember [the last time we spoke], but in this industry, it’s easy for people to want to deal with their emotions first before reaching out to friends. So I’m just waiting for his reply.”

Although the two friends have not met up for half a year, Alfred said, “We will not meet up if it’s not necessary during this time.”

Alfred Exposes His Shoulders for Promotion 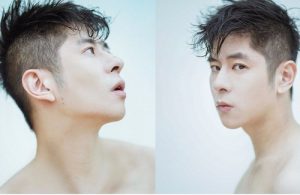 To promote his new song, Alfred shot some pictures in which he exposed his shoulders. “It’s a new challenge,” he expressed. “I wanted to convey that powerlessness means everyone faces their emotions while naked. During this time, everyone feels powerless, but we all move forward together.”

He added that exposing his shoulders is his limit, as revealing his figure is not his forte. As Alfred used to be a chubby boy, Owen Cheung‘s (張振朗) nephew was cast to portray a younger Alfred in the “Feebleness” MV. “When he grows up, he might win Best Actor or become another Owen Cheung,” Alfred joked.