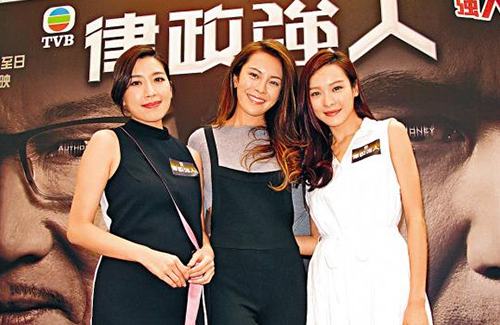 With her career on the rise, it appears that Ali Lee (李佳芯) isn’t quite ready to acknowledge her boyfriend, Viu TV presenter Danny Chan (陳炳銓).

A few days ago, Ali and her Law dis-Order <律政強人> costars, including Mandy Wong (黃智雯) and Kelly Cheung (張曦雯), attended a promotional event for their series. Lead actors Alex Fong (方中信) and Liu Kai-chi (廖啟智) were both absent, but Ali said the two veteran actors will make an appearance when the production crew holds a dinner banquet later this week.

Earlier this year, Ali admitted to dating Danny Chan, a presenter for Viu TV. The two were seen out on dates on multiple occasions. Some paparazzi even managed to snap photos of them kissing. A few days ago, Ali was spotted leaving Danny’s home early in the morning, leading to cohabiting rumors.

Ali denied living with Danny. She explained, “My flight landed at 5 in the morning. I left some of my sponsored clothes at his house, so I went to pick them up.”

The 33-year-old was shocked when she saw her paparazzi photos on gossip magazines. She said, “It’s frightening. I was never filmed like that before. Although it is normal to date and hold hands, I am not used to people taking photos of me like that.”

While Ali did admit to dating Danny when reporters questioned her a few months ago, she suddenly changed her answer this time, describing Danny as just a friend she is currently “observing.”

“We need more time to understand each other,” she said. “I also need to work, so there really isn’t enough time for us to develop further. I feel helpless.” (So he’s not quite your boyfriend yet?) “Not yet. Getting our privacy breached like that has affected our relationship. We need to find another way to communicate. We are dating, but it’s not stable!”

2012 Miss Chinese International winner Kelly Cheung, who made her drama debut through Law dis-Order, said she was pleasantly surprised at the positive responses she got on her acting.

The 26-year-old, who chose to host television programs for TVB after winning the pageant, said, “I’m surprised. Originally I was only hoping that the audience would at least tolerate me. I didn’t expect to actually get good reviews.” (Why the lack of confidence?) “It was my first time filming a television drama. I was worried that I wouldn’t be able to get into character. Besides, most people are used to seeing me as a television host!”

Law dis-Order, a legal drama about two money-minded and power-hungry lawyers, premiered on September 19 to 25 points, drawing an average of 1.63 million viewers. It finished its premiere week with 23.3 points. Ratings dropped to 21.8 points on its second week of broadcast.

33 comments to Ali Lee No Longer Acknowledges Her Boyfriend