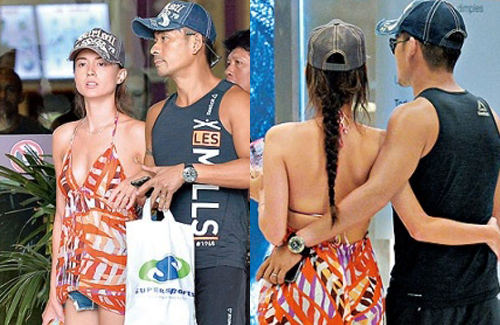 Casino tycoon and Sun Entertainment Culture’s owner, Alvin Chau (週焯華) was embroiled with an extra-marital affair with model Mandy Lieu (劉碧麗) since 2014. Although Alvin’s wife, Heidi Chan (陳慧玲), had initially accepted her husband’s multiple affairs, the couple was unable to salvage their marriage since the birth of Mandy’s daughter last May. Heidi announced her divorce intentions in December.

Free of any marital ties, Alvin no longer bothers to keep Mandy away from Hong Kong. The couple officially made an appearance together hand-in-hand, publicly acknowledging their relationship. Focusing his attention now on his new family, Alvin, Mandy, and their eight-month old daughter recently enjoyed a vacation in Phuket, Thailand.

Although an earlier report claimed that Alvin’s father requested to meet Mandy and her daughter during Lunar New Year, it was revealed that Alvin actually spent the holiday with his father, sister, and children in Tokyo. Despite Alvin’s upcoming divorce with Heidi, Alvin’s father dotes heavily on her and they are all still living together. Given Heidi’s good relationship with Alvin’s family, it will not easy for Mandy to earn their approval.

Alvin’s elder sister, Candy Chau, also went on Facebook to vent her frustration about the situation. Although the message did not specify any names, it was evident that she was referring to Mandy. Candy wrote, “You [expletive]…. Don’t think you can [expletive] force my dad. Don’t be [expletive] stupid. God knows what you did. You are so [expletive] despicable and shameless. Do your parents knows?” Despite the high-profile divorce, it appears that the drama has yet to subside.