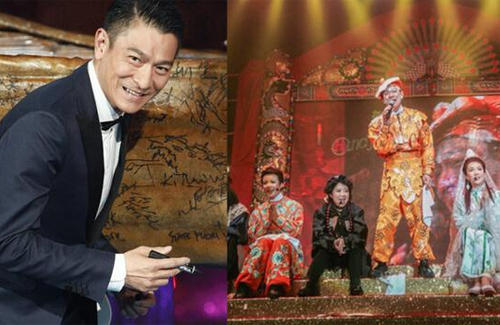 Andy Lau (劉德華) celebrated his 54th birthday on September 27. Rather than spending the day with his wife and daughter, however, Andy ate out with a few of his colleagues.

Because Andy’s birthday happened to coincide with the Mid-Autumn Festival this year, many of his fans assumed that he would spend the day with his family, which is customary for the holiday. However, an insider revealed that Andy’s wife, Carol Chu (朱麗倩), and his daughter, Hanna Lau (劉向蕙), were not part of the birthday celebrations.

Instead, Andy spent his birthday dinner with some colleagues who had helped him prepare for a fan gathering. On the day of the gathering, Andy was scheduled to appear in a stage performance of Journey to the West <西遊記>, which meant he would not have sufficient time to take care of the gathering’s preparations. Luckily, a few of his colleagues offered to give him a hand, which may be the reason Andy invited them to his birthday dinner rather than celebrating privately with his family.

1 comment to Andy Lau Celebrates Birthday Without Wife and Daughter