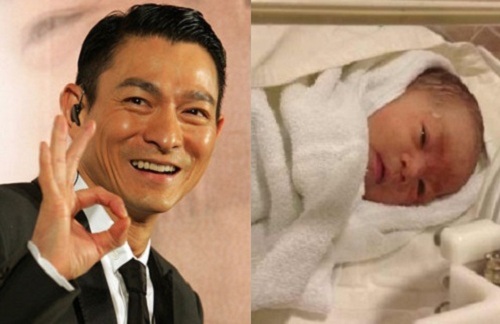 Since 50-year-old Andy Lau announced that his wife, 46-year-old Carol Chu, successfully became pregnant last year, fans were ecstatic over the news. Although it was initially reported that her due date was in June 2012, Carol was photographed with an increasingly growing belly recently.  It was reported that after consulting with feng shui masters, Andy and Carol selected an auspicious date and hour for their first baby to be born.

Last night at 10 PM, Jordan Chan posted a mysterious photo of a pretty newborn girl, without writing any captions to explain who the baby was. Due to the timing of Jordan’s post on Weibo, fans were quick to speculate that the baby may in fact be Andy Lau’s daughter! Many fans even found a strong resemblance in the baby’s features to Andy Lau–bearing the same large eyes and straight nose!

To clear up any misunderstandings, Jordan’s wife, Cherie Ying (应采儿) clarified on Weibo that the photo of the baby girl was their friend’s daughter! It was a misunderstanding due to Andy Lau’s fans overly eager to see photos of his newborn daughter.

Ada Choi (蔡少芬) wrote excitedly on Weibo, “That’s great! My idol’s daughter is born! I wish their entire family the best! Hope that the baby girl is healthy and his wife has a speedy recovery!”

Andy Lau Does Not Respond to Calls

Andy Lau was an intensely private person that did not always share his personal milestones with the public. In fact, Andy Lau kept his marriage to Malaysian heiress, Carol Chu, a secret for more than a year after the couple obtained their marriage registration in 2008.

The media has been unable to reach Andy or his manager to confirm the birth of his daughter. Meanwhile, a growing mass of reporters gathered outside the Hong Kong Santorium & Hospital, eagerly awaiting the appearance of Andy.

Corrections: This article was updated on May 10, 2012 at 6:41 PM to clarify that the above photo of the baby girl is not Andy Lau’s daughter, a fact confirmed by Cherie Ying on Weibo. In addition, it was initially reported that Andy’s daughter was born on May 8th, but her birth date was on May 9th instead.

Jayne: Congratulations to Andy and Carol! Although Andy did not confirm this news yet, if Carol Cheng announced it on her program, it is likely true. In addition, Carol’s recent photos revealed a huge belly, thus it is highly possible that already gave birth!

The origins of Jordan Chan’s photo is uncertain. If this is truly Andy’s daughter, she is beautiful and looks just like daddy!

18 comments to Andy Lau’s Daughter Born on May 9th!