Announcing her divorce with Huang Xiaoming (黃曉明) in January, actress Angelababy (杨颖) seems to be in a chill mood this Lunar New Year, and has been updating fans with her latest whereabouts on social media. 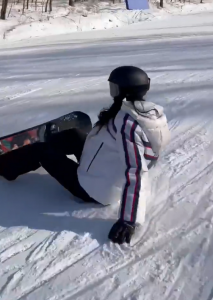 After posting four consecutive selfies at midnight on Lunar New Year, she kept up her good spirits by going snowboarding on February 5, and updated with videos of herself having fun in full gear.

Without needing any skiing poles, the 32-year-old appeared perfectly at ease on her snowboard and could roam quickly across the snow at high speed, proving her skillfulness at the sport! She later braked by slouching backwards and sitting on the snowcapped ground before quickly getting up, in what looks like a salute to actor Nicholas Tse’s (谢霆锋) self-created “lying with success” snowboarding move.