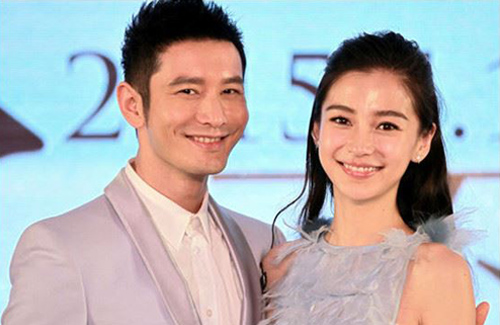 With Huang Xiaoming (黃曉明) and Angelababy‘s wedding only two weeks away, their friends are eagerly anticipating the celebration. Xiaoming refused to share details of their Shanghai banquet on October 8. He said, “I feel very lucky. I hope that our love will proceed to the end.”

Since good friend, Fan Bingbing (范冰冰) is eager to get married as well, the couple is reportedly reserving the bridal bouquet for her. Gushing over boyfriend Li Chen (李晨), Fan Bingbing said, “I think he’s the classic type and can eventually become a good husband and good father. He’s very stable.”

Xiaoming’s close friend and business partner, Li Bingbing (李冰冰) also expressed her interest to catch the bridal bouquet. “I plan to wear sneakers at Huang Xiaoming and Angelababy’s wedding so I can jump higher to catch the bouquet!”

And then, there is the question of who will be Xiaoming’s best man and Angelababy’s maid of honor respectively. Both Xiaoming and Angelababy are known to be very popular within the entertainment industry and have a wide circle of friends. Naturally, there are many people clamoring to be their Best Man and Maid of Honor. Mainland Chinese actor Wu Jing (吳京) and CEO of Pusi Capital Wang Si Cong (王思聰) have expressed their interest. As for Angelababy, Running Man‘s <奔跑吧兄弟> Zheng Kai (鄭凱) and Deng Chao (鄧超), as well as her close friends such as Ni Ni (倪妮), have all expressed their wish to be her “Maid of Honor”.

Finally, many are wondering what type of car Xiaoming will use to ferry Angelababy to the wedding ceremony. While the model of the car has not been revealed, Xiaoming already has plans to make the car extra meaningful. He is giving his fans a chance to personally sign the wedding car! All fans who post on the official Weibo page of “愛財有道” by September 25 will stand a chance to adorn the wedding car with their signatures. Twenty lucky fans will be chosen.