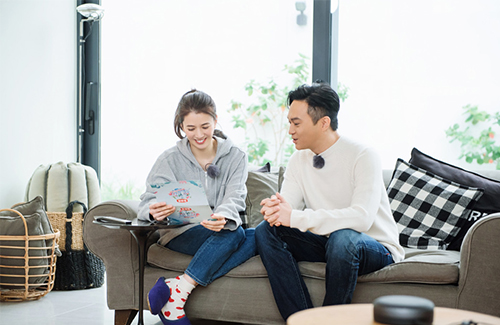 Together for 27 years, Anita Yuen (袁詠儀) and Chilam Cheung (張智霖) are inseparable. In a recent episode of the Chinese variety show Viva La Romance <妻子的浪漫旅行>, Anita traveled overseas for the first time without Chilam. She shared her vulnerability and tearfully opened up to her viewers about relying on her husband, saying that she will never travel again without Chilam by her side.

Chilam, who was recording the show in a studio, welled up in tears after hearing Anita’s confession.

Like what all normal couples would go through, married life wasn’t smooth sail for Chilam and Anita. In a sit-down segment featuring all the female guests of the show, Anita told the cast that she fell into postpartum depression after giving birth to her son Morton. “I just stayed at home all day, and [the depression] happened. I stopped showing any interest in my life.”

Anita then shared a time when she randomly broke down into tears after seeing her mother return home with two large bags of groceries. When her mother asked what was wrong, Anita simply said, “I don’t know. I was just thinking about how much you’re working. I cried.”

Chilam then asked if she had even wanted to help her mother. Normally, Anita would argue back, but at the time, she only knew how to cry and wasn’t able to control her emotions. Frustrated and at a loss of what to do, Chilam angrily walked out of the flat, banging the door shut.

“That was the first time I’ve ever seen him that angry,” said Anita. “I think he finally knew what was going on (the depression), and maybe he also didn’t know what to do. It was the hormones. I think a lot of men don’t realize this, and just think that being by your side would be enough.”

In an earlier interview, Anita mentioned that she considered divorce during her depression. When she watched how careful and hesitant Chilam was when he held their son, Anita thought Chilam considered them as a burden in his life.

The depression dragged on for half a year. Anita finally came to her senses when Chilam told her that they could no longer be together if she continued this downward spiral. Anita’s love for her family defeated all battles.