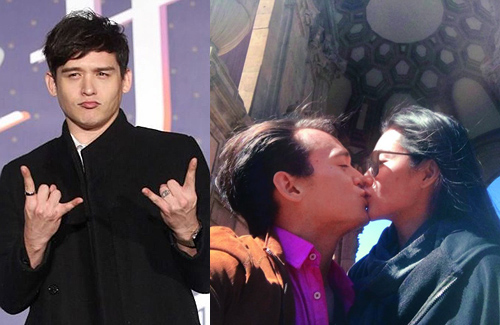 American-Taiwanese singer and actor Anthony Neely (倪安東) kick started his career and shot to popularity after participating in the popular singing competition One Million Star (超級星光大道) in 2009. Though he and his wife, Vivi, were married in 2010, their marriage was kept under wraps for fear of jeopardizing Anthony’s entertainment career. However, in 2014 and on his daughter’s third birthday, Anthony publicly acknowledged his marriage on his Facebook page.

In early 2017, the 31-year-old shared through his management agency that he is currently in the midst of a divorce from his wife after seven years of marriage. The divorce was spurred by the exposure of Anthony’s infidelity, where he was photographed kissing Taiwanese singer, Kris Kuan (管罄). While questioned by his wife, Anthony admitted that he has had several affairs with a total of four women, of which included a prominent actress. Another blow came when Anthony confessed to seeking out prostitution services while in Singapore for work. Devastated by her husband’s betrayal, Vivi allegedly sought to confront the actress in question. The actress, however, refused to meet and expressed, “It’s not convenient. I will never see him again. I’m preparing to get married, so I won’t see him again.”

The public was quick to deduce who the mistress could be and pointed out that Anthony once collaborated with Michelle Chen (陳妍希) in the 2012 romantic comedy, The Soul of Bread <愛的麵包魂>. Michelle, who is a prominent actress that is labeled as a goddess and got married around the time of the scandal, seems to fit the profile.

When these claims were published, Michelle’s management team quickly issued a statement denying the claims. “In regards to today’s news about Anthony Neely, our company’s artiste was not involved in the family matter. If any media or online netizens make any false accusations, we reserve the right to pursue legal action.”