Making news earlier for meeting two half brothers that he never knew about, Anthony Wong‘s (黃秋生) family is more complicated than meets the eye. Taiwanese media reported that Anthony also has a 20-year-old  illegitimate son who lives in England. “If someone asks me, I will definitely admit it. This is the truth; I don’t want to affect William,” Anthony said. 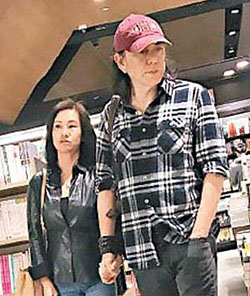 His wife of 26 years, Ng Wai Jing (吳惠貞), with whom they have two sons together, knew of William’s existence. “She knew a long time ago.” Ng Wai Jing and her sons live separately from Anthony, who asked for greater freedom after many arguments in the early years of their marriage. Despite Anthony’s infidelity, the couple maintains a cordial marriage and still holds hands when going out in public.

William and his mother, Joyce, reside permanently in England. Anthony sends a monthly allowance to pay for his son’s school expenses. William has visited Hong Kong many times, and even met with his two half-brothers a long time ago.

Anthony did not regret his actions. “I don’t regret anything!” said Anthony, who did not run away from his responsibilities in taking care of William. Abandoned by his own father when he was a child, Anthony had struggled with his self-identity for decades. He vowed he would not make his own son suffer in the same way.

When he is free, William often comes to Hong Kong to visit Anthony. “He was just in Hong Kong. Last night, we had dinner together. Today, he returned to England,” Anthony said.