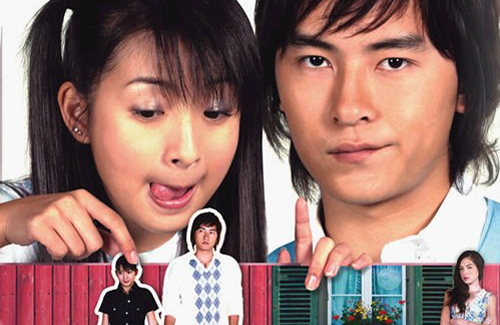 It has been ten years since the broadcast of popular Taiwanese idol drama, It Started With a Kiss <惡作劇之吻>. Earlier this week, Joe Cheng (鄭元暢), who played the male lead role in the drama, acknowledged the tenth anniversary of the drama by posting on his Weibo, “On this day ten years ago, what were you doing?”

Ariel Lin (林依晨), who played the female lead in the drama, immediately caught Joe’s drift and commented, “I was trying to pursue a very handsome but difficult person…” In response, Joe wrote, “I was also being pursued by a very cute girl!”

Joe then posted the same question to a WhatsApp group consisting of cast and crew from It Started With a Kiss, and uploaded screenshots of the conversation thread to his Weibo. In the WhatsApp conversation, a particularly touching comment was made by Cyndi Chaw (趙詠華), who played joe’s mother in the drama, “We were being a family…we will forever be a family. Thank you everyone for all your love.”

The screenshots were appended with an emotional reflection written by Joe, “Today is a very special day. Ten years ago today, It Started With a Kiss premiered on television. I just asked the It Started With a Kiss family what everyone was doing on this day ten years ago. This kicked off a very nostalgic exchange, where everyone shared all the things they found memorable. Perhaps everyone has certain special memories that they hold dear. For me, I would recall the scene where both sets of families sat down together for a meal and the two fathers were bickering with each other, while Zhi Shu [Joe’s character in the drama] could not stop himself from bursting out in laughter and everyone else was also trying to suppress a smile.”

Joe posted the same reflection on his Facebook, prompting Action Tang (唐從聖), who played Ariel’s father in the drama, to reply with another screenshot of their WhatsApp group chat. In the screenshot, Cynthia was asking, “Are we actually going to produce a film version of the drama?”

This was probably the same question hanging in the heads of all the fans, who were observing these exchanges and reminiscing over the drama that they had loved in their youth.

TAGS: Ariel Lin, It With a Kiss, Joe Cheng