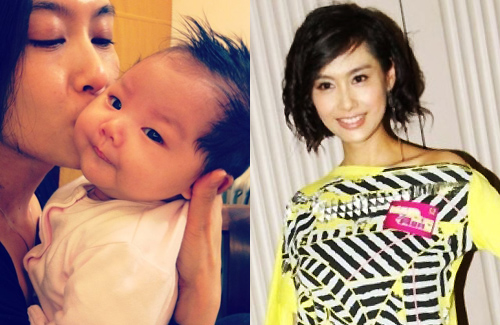 Athena Chu (朱茵) and Paul Wong (黃貫中) celebrated their daughter’s first 100 days of life by holding a private banquet inviting 60 of their close friends and family. Since giving birth in October 2012, Athena has already shed her pregnancy weight and resumed her former slim figure.

Dating for more than 14 years, Athena and Paul are an intensely private couple who revealed little about their personal lives. Since announcing her pregnancy and wedding plans simultaneously last year, Athena has hidden herself from the public eye over the next few months. After giving birth in October, the couple has only uploaded a few photos of their daughter, nicknamed as “Roast Pork Bun” on Weibo.

The Hong Kong media was alerted that Athena and Paul spent a six-figure sum to organize a 100-day baby banquet for their daughter at the Intercontinental Hotel in Tsim Sha Tsui yesterday. Rushing to the couple’s apartment, the paparazzi quickly tailgated Paul’s car for the full story.

When Paul realized reporters were following him, he got out of his car and asked, “What are you doing?” Reporters sprinted forward to flash cameras at Athena and the baby, who were sitting inside the car. The chauffeur quickly raised his arms to block cameras, but not before the paparazzi observed Athena’s newly slimmed down figure.

Paul asked the press to leave the family alone, “You already took the photos and have your exclusive coverage. Please don’t follow us anymore!”

Athena’s good friend, Monica Chan (陳法蓉), was spotted attending the baby banquet. Asked what gift she had given the baby girl, she only smiled and refused to comment. Ada Choi (蔡少芬), who is currently pregnant with her second child, was absent from the celebration since she was away from Hong Kong.

Later that evening, Paul was asked whether the 100-day banquet celebrating his daughter’s birth had already taken place. “No, we were just having a meal with friends. Since Athena and our daughter were inside the care, I was very nervous. It’s okay to take photos of me, but please don’t take photos of my family.”