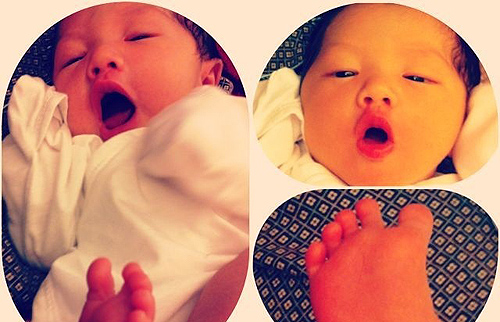 Congratulations, Athena Chu (朱茵) and Paul Wong (黃貫中)! The 41-year-old actress recently gave birth to a baby girl, according to a Weibo post by her 48-year-old fiancé Paul Wong, on October 23.

Paul wrote, “Everyone, a very gorgeous and freshly-cooked barbecue pork bun is out of the stove! To all the friends who cared for her, she wants to tell you guys this: Dad, mom, and I are finally back at home. Have a great Chung Yeung Festival!” The post was followed by a cute and cozy picture of the “Little Dragon Girl” yawning and a photo of her small foot. Athena Chu and Paul Wong have been dating for more than 14 years. Athena confirmed her pregnancy in April 2012, following weeks of speculation. A devout Christian, Athena was previously blasted for being a hypocrite, as she had stated in the past that she was against pre-marital sex.

Nonetheless, the couple announced that they plan to wed in late 2012. Various reports indicate that the due date for Little Dragon Girl was early November, but Athena decided to give birth earlier.

Paul has not yet revealed the baby’s name or her exact date of birth.