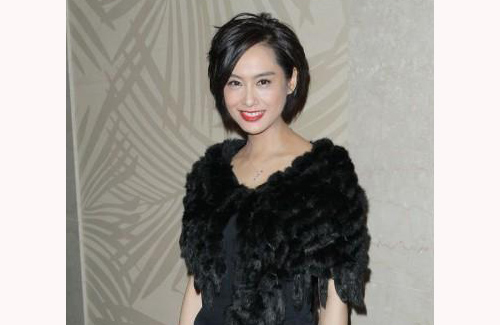 Athena Chu (朱茵) had kept herself away from the public eye since the beginning of her pregnancy, but now that her newborn daughter is already more than 100-days old, Athena has ended her confinement and is out and about, revealing her slim figure.

In Macau to attend Sheraton Hotel’s Completion Ceremony, Athena looked stunning in a black dress with red lipstick. Despite the loose fit of the dress, it is obvious Athena has lost most of her pregnancy weight. She said proudly, “I am now only 3 to 4 pounds away from my pre-pregnancy weight.” Attributing her weight loss to taking care of her daughter, Athena said, “Because I was confined at home, I did everything myself – from feeding the baby to washing her clothes.”

Though it is often said that new mothers lose most of their weight through breastfeeding, it is not the case for Athena. Afraid that she might not have enough breast milk or she may easily pass her germs to her daughter should she fall sick, Athena chose to feed baby formula for her baby.

Ever since her daughter was born, Athena and husband, Paul Wong (黃貫中) have kept her away from the public eye. Now that their baby has passed her 100th day, Athena could not stop gushing about her. Athena revealed that no matter how much she has heard about the joys of being a mother, nothing beats experiencing it for herself. “Now that I have become a mother, I finally understand what Ada Choi (蔡少芬) meant. Right now, my daughter is my top priority. I’m content just by looking at her. Even the sight of her spitting milk delights me!”

Weighing in at 6 pounds 10 ounces when she was born, the baby immediately brought happy tears to her parents’ eyes. Athena revealed that not only could she not stop crying, Paul, who witnessed the whole birthing experience, was touched to tears by the baby’s birth as well.

Athena and Paul had often referred to their daughter as “Roast Pork Bun”. At long last, Athena finally disclosed that she has named her daughter Wong Ying (黃鶯) after the oriole. She explained, “I like the sound of the word and I have also always liked the oriole because it’s beautiful and smart.”

Wong Ying’s English name, Debbie, which sounds like a shortened version of “Daddy’s baby” was named by Paul. Coincidentally, Debbie Harry is one of Paul’s favorite American singers.