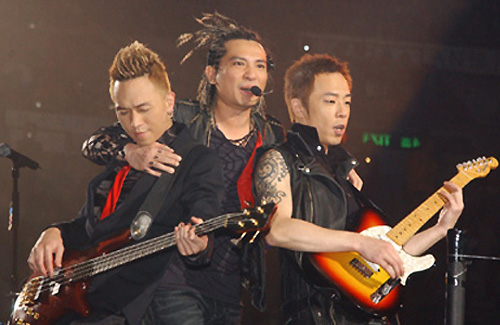 Former Hong Kong rock band, Beyond, which debuted in 1983, consisted of Paul Wong (黃貫中), Wong Ka Keung (黃家強), Wong Ka Kui (黃家駒), and Yip Sai Wing (葉世榮). Although its 30th anniversary concert this year did not happen, Ka Keung and Sai Wing will hold individual concerts, in which a segment will be dedicated to Ka Kui, who passed away in 1993. On May 25, Ka Keung wrote a letter to Ka Kui, his brother, on Weibo. The letter’s contents got on the nerves of Paul.

On May 27, Paul retorted at Ka Keung on Weibo three times. One of the posts said, “Ka Keung…what did I ever do to you…your music is not going to improve even if you continue to discredit me.” Not wanting to further anger Paul, Ka Keung and Sai Wing made no response to his message. Paul later used WhatsApp and told a magazine source, “Ka Keung has no friends!”

Once Paul’s post was published, around 3,000 fans were quick to comment. Most of them told Paul to control his anger. Ten minutes later, Paul quoted a Weibo post of Beyond’s former manager, Leslie Chan, which pointed out that Ka Keung was using Ka Kui as a method of promotion. The post said, “He says that Ka Kui told him to do so in his dreams every time. I sincerely send Ka Kui the song “Story”. After another fifteen minutes, Paul continued his rant, “Us brothers were all throwing up, seeing him beat up the assistant until he committed suicide.”

An insider revealed, “After Leslie published a photo album in mainland China, he wrote a letter of apology to Ka Keung, expressing his wish of having a 30th anniversary concert for Beyond. He became angry when Ka Keung refused! Paul used to hate Leslie, but now he’s using his words to lash at Ka Keung. As to how Ka Keung said he saw Ka Kui in his dreams, many friends know about it, but he never mentioned anything about reporting a dream. Also, the song “Story” was from five years ago. Ka Keung had wanted to have the three of them produce it together, but Paul went off by himself. Ka Keung and Sai Wing both refused, and the song could not be published. Paul bore a grudge against this ever since.”

Speaking of the suicide of Ka Keung’s former assistant, the insider continued, “[The assistant] said he had no house and borrowed money from Ka Keung without paying him back. He and his girlfriend even slept over at Ka Keung’s band house. But the worst part was how he stole Ka Keung’s two guitars and sold them in mainland China. Ka Keung fired him because he couldn’t stand it anymore.”

Paul was still in rage when reporters called him through the phone. He admitted, “I did hate Leslie in the past, but I’m a very fair person. I’m only agreeing with what he said.” Paul further revealed that many people know about how Ka Keung beat up his assistant in the past. At this point, reporters are unable to reach Ka Keung for his response to Paul’s words.