Athena Chu: “My Pregnancy Was a Terrible Miracle” 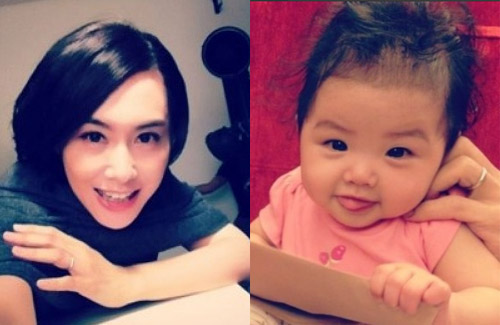 In April 2012, 41-year-old Athena Chu (朱茵) happily announced that she was three months pregnant with Paul Wong’s (黃貫中) child. As a devout Christian who once stated that she was against premarital sex, Athena’s pregnancy was met with some controversy. Netizens bombarded Athena’s Weibo with hateful comments, calling her out as a hypocrite.

To not bear the burden of being single parents, Athena and Paul quickly registered for marriage in late 2012. The couple did not even bother to hold an official ceremony to commemorate their marriage.

Athena and Paul’s daughter, Debbie Wong (黃鶯), was born in October 2012. For the next three months, Athena avoided the public’s eye and stayed at home to care for her. Athena made her comeback public appearance in January 2013, attending an event at Macau’s Sheraton Hotel.

Excited to share her new experiences as a mother, Athena will release her upcoming tell-all book, 6 Pounds and 10 Ounces < 6磅10安士>, this week at the Hong Kong Book Fair. Aside from sharing family photos in her debut book, Athena will clarify the claims of hypocrisy and reveal her thoughts on premarital sex.

“I Had No Choice”

In an essay titled “I Had No Choice”, she explained that had always considered Paul to be her life-long partner, even before their marriage in late 2012. Their reason for not tying the knot earlier was because they did not want the media and tabloids to negatively impact their marriage.

Athena also added that she never really believed in marriage, explaining that she has never been “emotionally touched” by a wedding. She attended countless weddings held for friends and colleagues in the past, but never had she cried in any one of them. “I never found myself to be emotionally engaged at any wedding. Even if I was one of those brides, I would secretly pray in my heart that everything would be over quickly….” She groaned that rehearsing for a wedding ceremony was even more difficult than rehearsing for a scene in a movie. She felt like she was betraying her own soul; she felt nothing, but yet she had to pretend to feel emotional.

Athena called her pregnancy a “terrible miracle”, explaining that due to her poor health, her gynecologist told her that she only had a 1 percent chance of getting pregnant. For someone who had wanted to be a mother for entire her life, the news was devastating to Athena.

But Athena did not cry with happiness when she found out that she was pregnant with Debbie – she cried from absolute shock and terror.

“Don’t be afraid!” encouraged Paul. “Both the child’s father and mother are here.”

Athena’s book, compiled with photos of herself and Debbie, will be available for purchase at the Hong Kong Book Fair this week.

61 comments to Athena Chu: “My Pregnancy Was a Terrible Miracle”