Beyond Says No to Reunion Concert 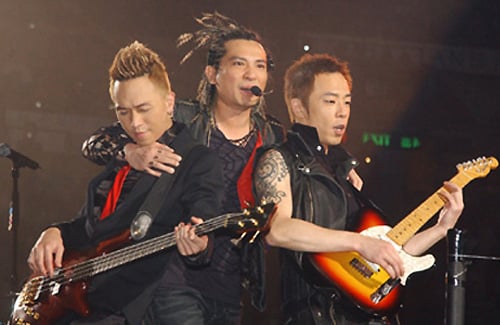 Even to this day, Beyond is considered to be one of the most famous and legendary Chinese musical partnerships of the 20th century. Although the rock band was never the same again after the death of the legendary Wong Ka Kui (黃家駒) in 1993, many fans look forward to see the quartet-turned-trio band to reunite on stage and bring back the old Cantorock classics.

The group had announced their split in 1999, but they reunited in 2003 to embark on a world tour to commemorate their 20th anniversary. After performing their last concert in 2005, the group announced their official disbandment.

This year marks Beyond’s 30th anniversary of formation and the 20th anniversary of Ka Kui’s death. On April 3, Ka Kui’s grave was strewn with flowers. Similar to the Leslie Cheung (張國榮) memorial concert that was held earlier this week, fans hoped that Beyond will reunite once again for another memorial recital.

But according to Next Magazine, Beyond has no intentions to reunite.

An insider revealed that producer Vigo Yau (丘亞葵) wanted to gather the three members for a concert. Vigo admitted this in a phone interview, “I had a chat with Steve last year. Both Steve and Paul Wong (黃貫中) are interested, but Yip Sai Wing (葉世榮) doesn’t want to return. Since they have different dispositions, I’ll rather not force them.”

Beyond Members at Odds?

Ka Kui was not only the leader of Beyond, but also the soul of the group. After his death, rumors of Beyond’s discord ran rampant. The alleged quarrels between Steve and Paul consistently made headlines, and their friendship was allegedly to be at its most heated when Steve accidentally slipped to the press about Paul’s relationship with Athena Chu (朱茵).

When Sai Wing left Hong Kong for a career in mainland China, tabloid reports claimed that Steve and Paul were unhappy with Sai Wing for using Beyond’s popularity for his own benefit. Rumors of Sai Wing clashing with the Wong duo were further fueled when Steve and Paul held a joint concert together without the presence of Sai Wing in 2009.

Sai Wing: “There is No More Beyond!”

Sai Wing is not completely against the idea of a Beyond reunion, but stressed that he does not want to do so this year. Sai Wing said, “I am now an ex-member of Beyond. I don’t understand why everyone wants us to [get back together]? [Beyond] has many other ex-members, and they made great contributions. Reunion with them is possible. I am just a part of the big picture. I am not against the reunion, but I have my reasons for not wanting to return. To me, Beyond disbanded in 2005. I don’t want to reunite and then break up again.”

Said Wing said, “I have my own dreams to fulfill. I am not young anymore, and I don’t have much time left. Why not let me pursue my dreams in the remaining 30 years of my life? Why do I have to satisfy everyone else’s wishes and not my own? I’ve always liked heavy metal, and that needs time to exercise. My second dream is to train newcomers and continue the spirit of rock music.”

Sai Wing insists that he is not in discord with his Beyond members. “We are still brothers. We were never at odds. We just have our own dreams.”

12 comments to Beyond Says No to Reunion Concert