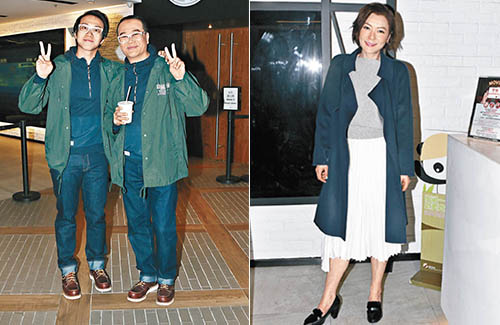 There’s going to be an interesting love dynamic in TVB’s upcoming blockbuster My Ages Apart <跨時代>, which stars Bobby Au-yeung (歐陽震華), Kristal Tin (田蕊妮), and James Ng (吳業坤). In the show produced by Joe Chan (陳維冠), Bobby and James swap bodies and experience each other’s lives. James now has the mind of a middle-aged man, while Bobby is young twenty-something-year-old man fresh out of college.

Bobby, now in James body, tries to pursue his wife Kristal Tin again, starting an interesting “sister-brother love” relationship. Asking if Kristal has been pursued by a much younger man before, Kristal laughed out loud, “None of those kids would dare! My husband is a karate black belt!”

The TV Queen is enjoying her time with Bobby, who plays her husband in My Ages Apart. Kristal said Bobby likes to tell jokes to lighten up the tiring filming atmosphere. She also teased Bobby for having a crush on Alice Chan (陳煒), saying, “He always calls me the wrong name. My character’s name is Ling Kit-yu, but he keeps calling me Lau Yuet-ngor (Alice Chan’s character in With or Without You). He wouldn’t even realize his mistake. It’s hilarious!”

James was also drilled with the question about his “sister-brother love” relationship with Kristal, to which Bobby joked, “What were you about to say? Mother-son? Don’t let Kristal hear you, or you’re dead!”

Mentioning to James that Bobby liked to call him by the nicknames “Seven” and “Big Eagle”, James shared, “Someone actually called me ‘big eagle’ when I went to a restaurant!” James said he wouldn’t mind proving it, to which Bobby joked, “I can prove it now!”