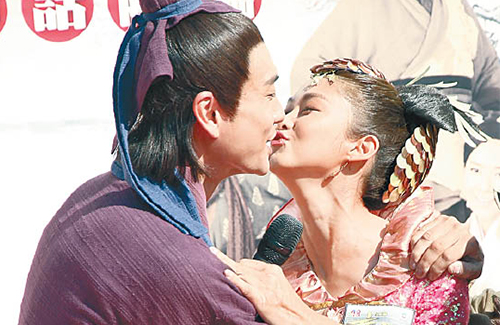 The promotional tour for TVB’s second anniversary drama Under the Veil <無雙譜> has officially started. The fantasy romance drama, which is a remake of TVB’s own 1981 television series Double Fantasies <無雙譜>, stars Wayne Lai (黎耀祥), Sonija Kwok (郭羨妮), Raymond Wong Ho Yin (黃浩然), Kristal Tin (田蕊妮), Bosco Wong (黃宗澤), and Eliza Sam (岑麗香) as three different couples in three separate stories. Their relationships are put to the test when they come across individuals who share the same faces as they do.

Under the Veil, which will be airing every Monday through Friday starting September 28, held a promotional event at the red stage in front of TVB Studios on Thursday. The cast passed out mooncakes to fans and also did a brief tour around Hong Kong in a tour bus.

Under the Veil is Bosco Wong and Eliza Sam’s second collaboration as a couple. In the series, Eliza portrays a carp spirit who falls in love with a mortal scholar, portrayed by Bosco. At the promotional event, Bosco and Eliza pretend to kiss while posing for photos.

“We decided to do something fun for photos and puckered up,” said Bosco. “[Eliza] plays a carp anyways, so having puckered lips suits her.”

Bosco revealed that all of their kissing scenes in the drama were very superficial, and joked that most of their romantic scenes consisted of just him carrying Eliza on his back.

“I had to carry her a lot,” said Bosco. “And she was a bit heavier then too. She told me that it’s good to be fatter because that way, she’d look cuter and would look more like a carp. If she was skinnier, she would be a salted fish. I don’t know how to respond to that comment, but she does make some sense.” Asking if Bosco had a hard time carrying her, Bosco said, “No, she’s not fat at all, but just heavier then compared to now. It’s cute!”

At the mention that his former girlfriend, Myolie Wu (胡杏兒), may be getting married this December, Bosco said, “If that’s true, than congratulations to her!” In regards to the rumors that Myolie was blacklisted by TVB due to her decision to sign with a new agency, Bosco said, “Really? I have no idea.” Does Bosco feel that TVB is being too narrow-minded? “No. I actually heard that [Myolie] will have an opportunity to film another TVB drama.”

Wayne Lai Has No Competition?

It has been a little under a year since Wayne Lai last appeared in a TVB drama. In addition to Under the Veil, Wayne will also be starring in TVB’s fourth anniversary drama Lord of Shanghai <黎耀祥>, which is slated to premiere on October 26.

With two anniversary dramas under his belt, Wayne has the upper hand in winning this year’s TV King prize. With the lack of competition, does the three-time Best Actor winner feel bored? “Of course not,” Wayne said. “The audiences all have their own preferences.” He added that he is happy to see newer and younger actors to compete for the award with him, and will be looking forward to this year’s award ceremony.