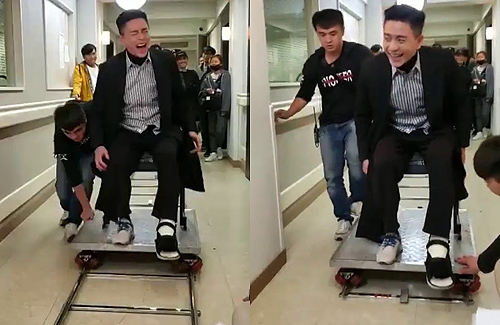 Bosco Wong (黃宗澤) recently fractured his left foot while filming for Shaw Brother’s upcoming web drama Flying Tiger 2 <飛虎之雷霆極戰>. He has now returned to work but still has a cast and walks with the support of a cane. Due to this, the team has arranged for all his action scenes to be filmed by a stunt double and they would only film Bosco’s facial expressions and upper body. It turns out that this is more difficult than it sounds!

Bosco posted a quick video snippet on social media of the filming of one of his scenes. It shows him sitting in a chair with a very serious facial expression. The chair is set upon a dolly cart that is pushed by one of the crew. Bosco then pretends to “walk” by moving his shoulders back and forth. Halfway through, he realizes how ridiculous he looks and cracks up laughing. He captioned the video with, “Director, how should a handicapped person walk with a sense of urgency?!”

Numerous celebrities including Priscilla Wong (黃翠如) and Yumiko Cheng (鄭希怡) found Bosco’s video to be hilarious and replied to his post.