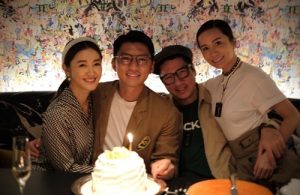 Yesterday, Benjamin Yuen (袁偉豪) celebrated his 39th birthday in advance with his girlfriend of three years Bowie Cheung (張寶兒) and power couple Paisley Wu (胡蓓蔚) and Pal Sinn (單立文). That night, the young lovebirds did not hold back and showered each other with kisses. Basking in happiness, Benjamin posted the photos of Bowie kissing him on the cheek and him happily doing the same on Instagram. 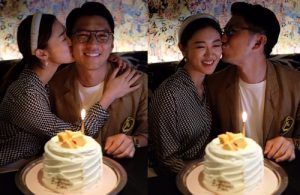 He captioned the photos, “Every year in May, everyone would gather together to celebrate my birthday, but due to [social distancing] restrictions, we cannot meet up with all my good friends. Still, this year I have received a rare birthday kiss. As that was the case, I immediately gave her one in return since I am a person who understands social etiquette.”

They See Each Other as “The One”

Benjamin and Bowie became lovers in 2017 after collaborating on travel program All Work No Pay Holiday <打工捱世界Ⅱ>. They announced the good news shortly after reporters caught them on several dinner dates. Drawn to Bowie’s cheerful and attentive personality, Benjamin described her as his “happy baby” at the time.

As someone who always felt that love is restrictive, Benjamin is glad that Bowie doesn’t seek to control him. Having lost his first love when he was 15 or 16 years old because he didn’t cherish her, Benjamin has learned how to love better through Bowie.

Grateful that she stayed by his side to accompany him through tough times when his father died in 2018, Benjamin admitted that he finally found the person who would stay beside him no matter what challenges they have to face ahead. Believing that Bowie is his life partner, he once expressed that he will reveal good news once the time is right. 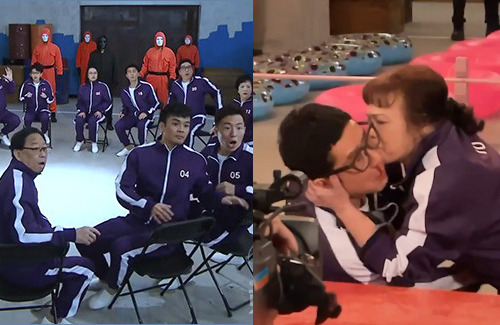