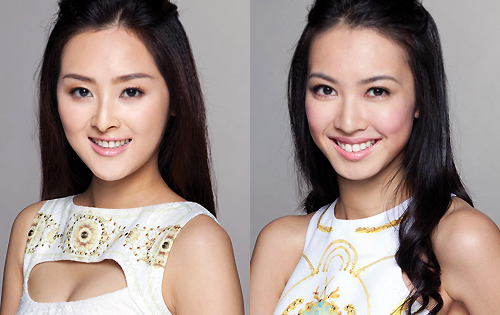 Carat Cheung’s (張名雅) crown victory in the 2012 Miss Hong Kong Pageant is currently hotly contested. Due to the failure of TVB servers on the evening of the 2012 Miss Hong Kong Pageant, audiences’ live votes became useless. Carat Cheung was selected as the winner based on judges’ votes, while second runner-up, Tracy Chu (朱千雪), remains as netizens’ favorite. Had TVB not experienced its technical failure, would Tracy Chu have won the crown instead?

Carat Cheung’s uncle, director Alfred Cheung (張堅庭), believes this may be the case. He acknowledged that Tracy Chu possessed a sweet look that made her a favorite among the masses. Regarding Carat’s controversial win, Alfred replied, “Most pageant results are not based on a one-person-one-vote system; the winners are determined from a group of professional judges instead. The audience and judges will evaluate the candidate based on different criteria.”

Alfred added, “Judges will be more comprehensive, evaluating a candidate’s communication and response skills, to assess whether she is a suitable artist. The audience will only care whether the candidate is pretty or not pretty. This is understandable. I think that the ‘one person, one vote’ is just for fun and gimmicks.”

Since his niece, Carat, had possessed a long desire to become an artist, Alfred was happy for her Miss Hong Kong victory.

After Carat Cheung was announced as the 2012 Miss Hong Kong Pageant winner, online Hong Kong communities quickly held their own polls to determine the “true winner” among the masses. Since second runner-up, Tracy Chu, led online votes,  Carat’s victory has been marred by controversial disputes.

Although her own uncle, Alfred Cheung, did not believe that Carat had the qualities to sway the masses, Carat did not doubt her own win. Pointing out that past pageant winners were based on judges’ votes, Carat felt that the judges’ decisions should be trusted and respected. “The results have been determined and need to be accepted!”

Expressing her confidence, Carat believed that it was only the failure of the voting system which made the public disappointed. If the winner were selected based on the one-person-one-vote system, Carat believed that she would be able to sway votes in her favor as well.

Asked if Carat felt that her future path in the entertainment industry will be difficult due to her controversial pageant win, she indicated confidence in herself. Pointing out that each year’s pageant winners did not face an easy path, yet a difficult path must still be confronted. Carat vowed to do her best to gain the public’s acknowledgment instead.

Tracy Chu remained as the masses’ “true winner” in this year’s Miss Hong Kong Pageant. Although Tracy was happy for netizens’ support, she believed that the final pageant results were fair. She felt that there was no need to re-select the winner. Tracy will not file any complaints against the pageant outcome.

First runner-up, Jacqueline Wong (黃心穎), was also a favorite among netizens. She was confident in her performance in the pageant finals and would not mind if the results were re-determined.

Artists within the industry were quick to bash the unfairness of the pageant results.

Sukie Sek (石詠莉): “When there is universal voting, the server died. All the votes went down the drain; even the car prize is gone! It is disappointing to be cheated! I would like to vote for Tracy Chu!

Vinci Wong (王賢誌): “If I were Jacqueline Wong or Tracy Chu, I will immediately file a complaint to re-determine the pageant results! The one-person-one-vote system has been fooled; a massive street protest should occur!”

Bonnie Lai (黎淑賢): “It’s a big joke! It’s extremely retarded! How can this happen to such a large company (TVB)?”

Winners Will Not Be Re-Determined

TVB Deputy Director of External Affairs, Tsang Sing Ming (曾醒明), bowed his head and apologized for TVB’s technical failure in the live voting system. However, Mr. Tsang said that the results will not be redetermined, since the judges’ decisions will be final.