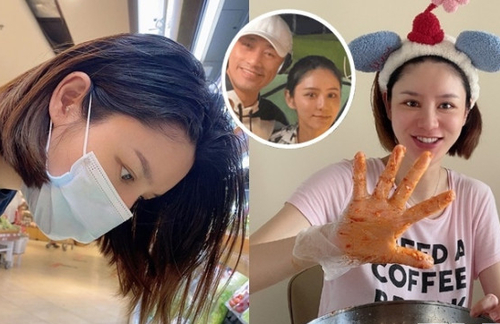 Last January, it was widely speculated that Raymond Lam (林峯) had a shotgun marriage with Carina Zhang (張馨月), who was allegedly one month pregnant. However, the attention on them naturally faded as the couple did not respond to the claims at the time. However, suspicions arose once again following Carina’s latest social media updates. 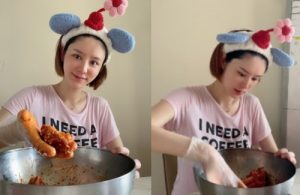 Sharing photos and videos of her grocery shopping and cooking, netizens could not help but notice the tell-tale signs of pregnancy. One of the major hints was, of course, her appearance. Carina, who has rocked her long locks for the longest time, traded it for a bob haircut. Her grown out roots were also prominent, yet it appears that she has no intention to touch them up. A netizen wrote, “It’s likely that she’s pregnant since she even held back from dyeing her hair again.”

After going grocery shopping, Carina recorded herself making garlic grill pork ribs. She sat in one spot the whole time and strategically used a huge bowl to cover her stomach. Although her limbs were slim, netizens pointed out that the difference in her key facial features is obvious. They commented, “Is she pregnant? She looks quite chubby,” and “Her nose got bigger, so it’s likely she’s pregnant.”

Some netizens used a more direct approach and gave their blessings to the couple. One Internet user wrote, “She’s definitely pregnant. Congratulations!”

Besides noticing that her hair was split into two colors, netizens also found a photo that showed her oily hair and wondered if she washed it. Instead of responding to the pregnancy remarks, Carina chose to reply, “Just two days,” to the person who asked if she hadn’t washed her hair.