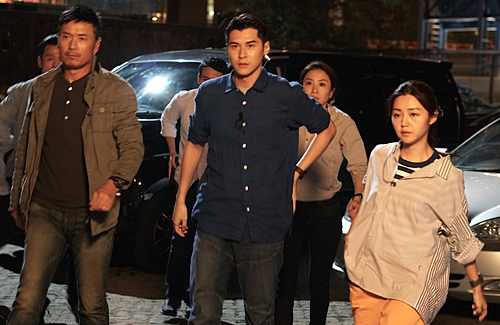 In the movie, Carlos and Michelle are police officers who both report to Michael. The intense shooting scene began with Michael leading Michelle and Carlos into an ominous house and discovering Gill Mohindepaul Singh (喬寶寶) with a back full of stabbed syringes. The actors handled the scene professionally and praised each another after the scene was completed.

Michael gave his input, “Carlos and Michelle are really good. One is handsome, and the other is like a hot little chili. Don’t underestimate Michelle just because she’s small; there’s no joke, she can be very fierce!”

In hearing how Michael described her, Michelle was happy to show a different side to herself. She said, “My previous roles were very proper, so this film opportunity is a new challenge. As for Carlos being handsome, the entire Hong Kong thinks he is handsome. He’s a male god.”

The actress also mentioned that working with Michael is a great learning experience because Carlos and she have few experiences in filming action scenes. Michael taught them how to shoot the scene effectively. “Sam Gor looks so cool every time he fires his shot. He’s very agile, and he’s also really good at [shooting]. There are many times that I would shut my eyes when firing, but Sam Gor wouldn’t. He’s stable, and this is what I can learn from him.”

Behind the scenes, Michelle and Carlos are good friends and often play games together. When they tried to see  who could pull out their gun faster, they laughed as Michelle was a step late in doing so.