The 2019 Miss Hong Kong Pageant has found its beauty queens.

Around 200 TVB artistes attended the event as celebrity judges or special guests. Their votes were combined with the star judge panel and the Hong Kong viewers using the “big big fun” app ti select the three winners.

The theme of this year’s stage is water world. True to Miss Hong Kong’s motto of combining beauty with wisdom, the contestants showed off their talents through various performances. They offered quick answers to challenging questions, and walked a bikini show. The TVB artistes interacted with the contestants constantly for a more lively atmosphere. 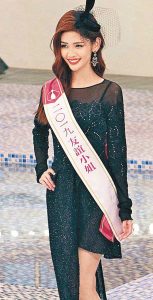 The ten girls collaborated in several performances: all ten girls performed a dance break with TVB stars Dickson Yu (余德丞) and Arnold Kwok (郭子豪). When it came to their own solo performances, our three winners Carmaney, Fei, and Kelly found a common ground of doing solo dances. Blossom Chan (陳熙蕊) performed a rap segment, Katy Yeung (楊詠彤) did a ribbon dance, while Kayan Choi (蔡嘉欣) did aerial yoga. Maggie Leung (梁敏巧) and Ivy Liu (廖倬竩) were the first two contestants to get fouled out.

The remaining eight contestants were asked to do “ugly poses,” which they all were more than happy to deliver. In the end, judges selected Carmaney as Most Beautiful Contestant. During the Q&A section, judges noted that Carmaney, Kayan, and Blossom had the wittiest responses. 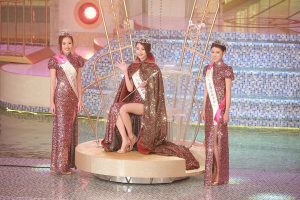 Blossom won Miss Friendship, but was eliminated before the final round. Top five finalists were Fei, who won Miss Photogenic, with Carmaney, Kelly, Kayan, and Fefe Tse (謝采芝). The girls were in tears when their names were announced. Fei said though she knew she had always been one of the more unpopular candidates, she insisted to go through with the race. Kelly said she hopes she would continue fighting like the Sailor Scouts.

In the end, Kayan and Fefe were eliminated, leaving Kelly as second runner-up, Fei as first runner-up and Carmaney as Miss Hong Kong.