Cast of “From Vegas to Macau 3” Share Filming Experience 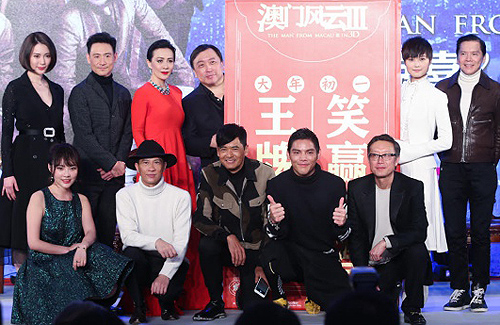 Opening during the Lunar New Year holiday, From Vegas to Macau 3 <赌城风云III> features Chow Yun Fat (周润发), Andy Lau (刘德华), Jacky Cheung (张学友),Carina Lau (刘嘉玲), Nick Cheung (张家辉), and Li Yuchun (李宇春). Apart from Andy, many of the stars attended a recent press conference to share their filming experiences. The final trailer for the film was also revealed, and there was also a segment where the cast had a live question-and-answer session with netizens.

After the trailer was aired, the host facilitated a discussion among the cast members. Carina was asked about her experience playing villains together with Jacky. She laughed and said, “Actually, I’m not truly a villain in the film. All I do is try and quietly play my role as the pretty woman. Many of the things are engineered by Jacky. I’m completely kept in the dark.”

In response, Jacky said, “I only agreed to take on this project when I saw in the script that I was going to play the most invincible villain in the world. I have the opportunity to spar with film gods in acting, romance film goddesses and employ such beautiful minions. I am very content!”

When the cast members were asked to sum up their filming experience in one word, Carina picked the word “wish”. She explained, “This film allowed me to work with so many heavenly kings, and gave me the opportunity to be ‘in a deep relationship with’ two of them. It has fulfilled one of my greatest wishes since entering the film industry. I also wish to bless everyone else who is still hopeful for romance, and wish that everyone will find love in the new year.”

Jacky picked the word, “emotion”. He expressed that his character in the film is very sentimental and has a complicated romance with Carina’s character. He added that he also used a lot of emotion when singing the film’s theme song, “Stop Motion” <停格>.

Nick picked the word, “enjoyable”. He said that being able to film with Chow Yun Fat, Andy, and Jacky made for an extremely enjoyable experience.

As for Chow Yun Fat, he chose the word, “joy”. He expressed, “Being involved in this film allowed me to gather with both old friends and new friends. The entire filming process was very joyful, with people constantly chatting and laughing with each other. It’s been a very happy experience. I hope that the film will provide cinema goers with the same happiness, and live up to its vision of bringing joy to the masses.”