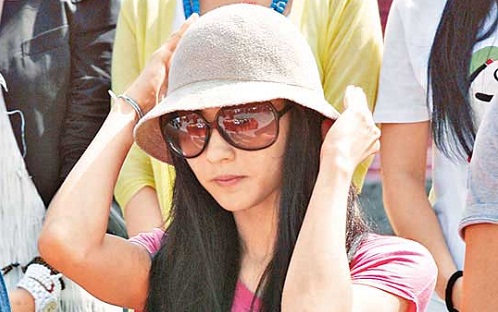 When Cecilia Cheung (張栢芝) ran into ex-flame, Edison Chen (陈冠希), on an airplane earlier, her former hatred for Edison due to their nude photo scandal apparently dissolved. Cecilia and Edison’s friendly photo collaboration on the airplane became the instigating factor leading to Cecilia and Nicholas Tse’s (謝霆鋒) divorce. Cecilia was afraid to run into Edison and afraid to appear in Shanghai again!

Over the last three months, each time Edison appeared in Shanghai, Cecilia would certainly arrive in Shanghai the day before. There was no exception over the last week as well:

July 13: Nicholas Tse went to a hair salon to cut his hair in the Central district, while Edison Chen passed by on the same street.

July 14: Edison Chen appeared in Shanghai to attend the opening ceremony of an exhibition.

July 17: Cecilia went to Shanghai to attend a fashion show.

Since Edison Chen was in Shanghai, it was speculated that in order to avoid seeing him there and the paparazzi’s subsequent questions, Cecilia cancelled her event appearance on the dance program. Earlier, the event organizers told reporters that Cecilia had promised to appear on the show on July 17th. Yesterday, dozens of reporters rushed to Shanghai, but there was still no sign of Cecilia Cheung at 4 PM, two hours after the program had started.

When reporters were disappointed by Cecilia’s absence, a staff member from the event explained that Cecilia did promise her appearance a few days ago. However, due to a sudden reason, she was unable to attend. Another member of the organizing committee revealed that Cecilia very happily agreed to appear on the dance program. At a Shanghai fashion show on July 14th, Cecilia once again confirmed her attendance in person for the July 17th appearance. It was planned that Cecilia would sing and also dance the program’s opening section. When she was in Shanghai earlier, Cecilia secretly practiced her dance steps.

To Cecilia’s unexpected surprise, Edison Chen appeared in Shanghai from July 15th to 18th to attend a brand promotional activities. On July 15th, Nicholas Tse’s younger sister, Jennifer Tse (谢婷婷), was also in Shanghai. Although Jennifer and Cecilia got along well in the past, Jennifer has recently stood by her brother’s side amidst the divorce scandal.

A staff member said that Cecilia was afraid to meet Edison in Shanghai and make Nicholas unhappy. As a result, she missed  her appointment. There were news that stated Cecilia Cheung was busy filming and could not appear for the event. Allegedly, due to her two sons, Lucas and Quintus, Cecilia will not easily agree to divorcing Nicholas. After filming The Lion Roars Again <河东狮吼2>, Cecilia will wholeheartedly take care of her two sons.

Jayne: Indeed Edison has been caught in an awkward situation in Cecilia and Nic’s divorce crisis. Edison has been blamed for instigating the divorce and now, the reason why Cecilia missed appearing in a promo event.