Edison Chen Has a Schoolgirl Fetish; Cammi Tse: “I Did Not Have Sex With Him!” 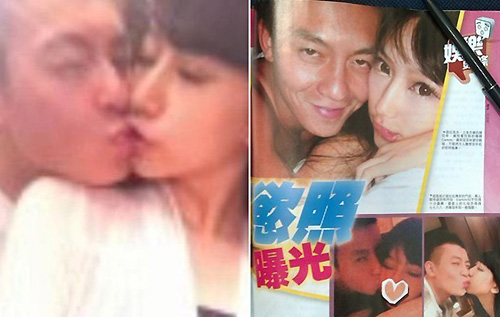 Despite weathering the nude photo scandal, Edison Chen (陳冠希) remained fearless, shockingly discovered to be dating 16-year-old model, Cammi Tse (謝芷蕙).  Yesterday, the couple’s private kissing photos were exposed. With his image shattered, Edison drew quick boundaries from Cammi, while announcing that he had broken up with former girlfriend, Vincy Yeung (楊永晴) six months ago. Cammi was left alone to face the media’s intense pursuit and in a quivering voice, insisted that she did not have a sexual relationship with Edison Chen!

With the turmoil following his 2008 nude photo scandal, Edison’s reputation and career were emptied in one shot. Although people may have expected him to turn over a new leaf, it turned out that Edison was still obsessed with taking photos.  After the Oriental Daily newspaper initially published a lip-locking photo of 31-year-old Edison and 16-year-old Cammi yesterday, additional photos of the couple circulated online last night. In the photos, Edison’s naked shoulders were apparent while he kissed Cammi ecstatically.

According to an inside source, Edison frequently invited Cammi to his house, requesting her to model  maid-inspired lingerie and her school uniform to satisfy his photography fetish.

Romantically linked with Edison in the past, Gloria Wong (黃榕) complained that he had gone too far by dating a 16-year-old student. Gloria said, “I’m not surprised that he is dating a 16-year-old. He is interested in all types of women! The worst may be that he asked her to wear her school uniform to take photos! It’s too much! He should see a psychiatrist to curb his lust!”

Edison Chen: “I Broke Up With Cammi Tse!”

Although Edison’s relationship with Cammi was only exposed yesterday, he rushed to draw clear boundaries between them. Currently overseas, Edison’s manager responded on his behalf, “After seeing these reports, my mood has been very complex. About six months ago, I broke up with Vincy. The feeling of lost love did not feel good and when I met this girl Cammi, I thought there was a possibility to develop further. Our relationship had only started and this incident [circulation of kissing photos] happened. I do not have anything to respond and can only tell you that at this moment, I have resumed my single status!  Thank you everyone for your concern!”

Due to the exposure of the kissing photos, it was understood that Edison and Cammi contacted each other to discuss the situation. Although Cammi wished to mend the relationship, Edison was intent on breaking up.

Cammi Tse: “I Did Not Have Sex With Edison!” Aside from announcing that he had broken up with Vincy Yeung half a year ago, Edison also coldly broke up with the underage Cammi. In a telephone interview, Cammi said, “I knew he and Vincy had broken up. We had started dating for a short period of time.” (After the kissing photos surfaced, have you been in touch with Edison?) “We exchanged text messages as regular friends. We have already broken up, which was not due to this incident.”

Cammi indicated that she had lost her cell phone earlier and suspected that her kissing photos were leaked as a result. Cammi was very scared and afraid that her family, who was [unaware of her dating Edison], would see the photos.The administrators at Cammi’s school were concerned about the situation as well, but did not ask her to stop attending school. Cammi indicated that she will continue to go to school.

Allegedly, Cammi’s management company will help her file a police report. Cammi insisted that no additional revealing photos were taken. The reporter asked whether Cammi and Edison had taken the photos willingly, she responded, “I do not know how to answer, but I am already 16-years-old!” Jayne: Didn’t Edison also date Vincy Yeung when she was only 17? Apparently Edison’s mentality and lifestyle may not have changed too much over the last 10 years. He appears to still love to party and date young girls.

57 comments to Edison Chen Has a Schoolgirl Fetish; Cammi Tse: “I Did Not Have Sex With Him!”