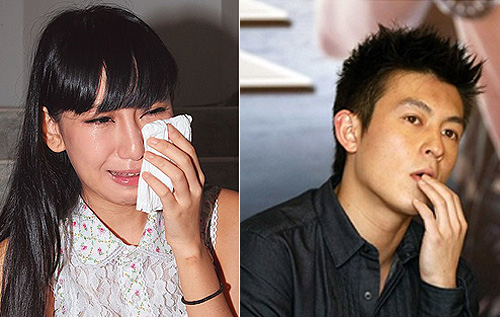 In early 2008, over 1,000 of Edison Chen’s (陳冠希) pornographic photos were leaked publicly, leading to a shattering scandal. Three years later, the subject of Edison’s 2008 sex scandal have been unable to step out of the shadow. However, Edison continued to be addicted to self-taken intimate photography. Fearless, Edison picked up his camera again and the subject of his latest lip-locking photos was 16-year-old model, Cammi Tse (謝芷蕙).

Although Edison requested Cammi to kept their relationship a secret, she could not resist from posting a photo of them together on her blog in September to show off her happiness. In addition, Cammi posted a photo of a $5,000 HKD Hello Kitty bra which was presumably a present from Edison on her blog.

R: How do you feel right now?

C: I am truly hurt. It was a private matter to date, however the entire world is talking about me and attacking me now. I am very unhappy and feel a lot of stress.

R: How did you meet Edison?

C: At his company (Juice). We were introduced by friends and continued to send text messages to each other.

R: After Edison released a public statement, have you been in touch with each other?

C (starts sobbing): After his statement, I realized we have truly broken up.

R: You took the photos on his bed?

C: We usually meet at his house and the photos were taken in his bedroom.

R: Did he ask you to take the photos?

C: He asked me to film a clip and said it was for his company’s use.

R: What kind of clip was it? Why has his company never used it? Did Edison retain it for private use?

C: I do not know…I am very scared!

R: Did he ask you wear lingerie and your school uniform for cosplay purposes?

C (eyes started brimming with tears): …I will not answer that question! (Hands start shaking) I can only say that it was not a sex video; I wore clothes throughout the clip!

R: Did you give your first time to him?

R: Did you have protective sex?

C (continued to cry): I do not wish to talk about it. Anyhow, I know how to protect myself.

R: Does Edison still love Vincy Yeung? Are you still upset at him?

C: I do not know (big sigh)…. We were only together for 3 months, but I was really happy because he was very sweet to me. I believe that he was sincere at the time (paused for a few seconds) but…why did he have to treat me like this?!

Cammi Tse’s Father: “I Will Punish Her!” When Cammi Tse and Edison Chen’s intimate photos were exposed on Monday, November 1st, she insisted on going to school that day. Cammi was a Form 4 student at a high school in Kowloon Bay.  Originally scheduled to get off school at 3:3o PM, Cammi left one hour early and was spotted wearing a face mask stepping out of the school’s back exit accompanied by her father. Walking past a newsstand, Cammi’s father purchased a copy of a newspaper featuring coverage of Cammi’s intimate photos with Edison Chen.

When a reporter approached Cammi and her father, Mr. Tse, he said in a very upset manner, “Today, I have to take a day off to attend a parent-teacher conference!” (Did you know that your daughter was dating Edison Chen?)  “No, I did not know. My daughter never dated in the past.” (Now that the photos have been circulating, what do you plan to do?)  “What to do now? I have no eyes to look anymore! I will punish her tonight!”

At this point, Mr. Tse turned to Cammi and said, “Why don’t you answer the press’ questions? I do not know how to answer them!” Facing her father’s scolding, Cammi bowed her head and did not answer. Father and daughter drove back to their home in the Sau Mau Ping district.

Later that evening, Cammi put on light makeup to accept a Now TV interview, professing that she was very hurt by the recent turn of events. Cammi insisted that she was already 16-years-old when the intimate photos were taken.

Cammi’s manager, Admond, noted, “The company is very angry; Edison will affect Cammi’s future development. We do not interfere with our models dating and other personal matters, but an adult should not ask young girls to take such photos!”

Edison did not quit his long-time addiction of taking sex photos. He also preferred asking his partners to wear uniforms for role playing. According to behavioral psychologist, Lee Bao Nung (李寶能), men who enjoyed taking sex photos with women typically possessed very strong sexual desires. Since normal sex did not satisfy him, Edison needed to rely on “alternative sex.” Mr. Lee commented, “He has an enormous need, which is difficult to completely satisfy and thus he chose to express it in this manner. Role playing through the use of uniforms is a stimulating act. As a form of rebellious desire, it also projects the person’s extremely strong sexual desires.”

The now 31-year-old Edison Chen dated Cammi Tse, who turned 16-years-old in March 2011.  Lawyer, Wong Kwok Tung (黃國桐) said that the man would be out of luck if the woman was under 16-years-old while having sex, which may provoke lawsuits. “Any man having sex with a girl under the age of 16-years-old girl would be violating the law. Regardless of whether the girl was willing to do so, the man broke the law and faces a maximum sentence of 5 years imprisonment.” Jayne: Is Cammi Tse as innocent as this Sudden Weekly article portrayed her? Is Edison Chen truly her first boyfriend?