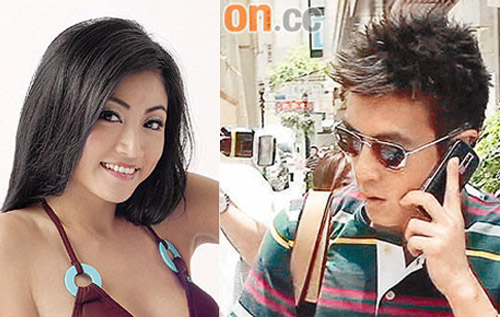 Entangled in another sex scandal, intimate photos of Edison Chen (陳冠希) and 16-year-old student, Cammi Tse (謝芷蕙) circulated recently. Displeased with his behavior, Edison’s rumored ex-girlfriend, Gloria Wong (黃榕), scolded him bluntly for his fetish obsessions. In a telephone interview, Gloria revealed that Edison had asked her to wear a pink lingerie set to pose for some photographs in the past. The bra was made of thin transparent material, similar to a cheap set [purchased in a sex shop] for tens of dollars.

At the time, Edison scouted the best camera angles to shoot the intimate photographs, but did not ask Gloria to model any difficult poses. Gloria stressed that agreed to shoot the photos only once, which left her with a disgusted feeling, as if she were raped.  Subsequently, Gloria asked Edison to delete the photos, but she did not know if he did in fact do so. In Gloria’s mind, the lingerie photos represented a time-bomb ready to explode at any time. In retrospect, Gloria deeply regretted taking the photos for Edison.

Gloria revealed that Edison resided with his elder sister, Tricia Chan (陳見飛), for a period of time. He was too lazy to care whether Tricia was home or not and continued to urgently ask Gloria  to go to his house for “pressing needs.” However, Gloria and Edison did not play in the outdoors and remained within the comforts of home.

Gloria Wong: “They Went Beyond Kissing!”

Regarding Cammi Tse’s insistence that she did not have a sexual relationship with Edison Chen, Gloria Wong said in a Now TV interview, “I do not believe her. Edison will not let women off the hook so easily. In the leaked photos, both Edison and Cammi did not wear any clothes [as indicated by their naked shoulders]. Their cheek-to-cheek photos revealed an obvious reddish glow in their faces, as if they were very ‘high.’ Of course they did not simply kiss!”

Gloria did not consider herself to be taking advantage of the situation [to attack Edison], but only wished to tell the truth. Jayne: Gloria Wong may be one of Edison’s ex-girlfriends who spilled the most dirt about him. So Edison’s photography fetish never went away.

If Edison were a Hollywood celebrity, more ex-girlfriends would have stepped forward to provide enough material for a scandalous biography already.