Edison Chen Turned Black-Faced Upon Hearing Cecilia Cheung’s Name And Shouted At Reporter, “Get Out!” 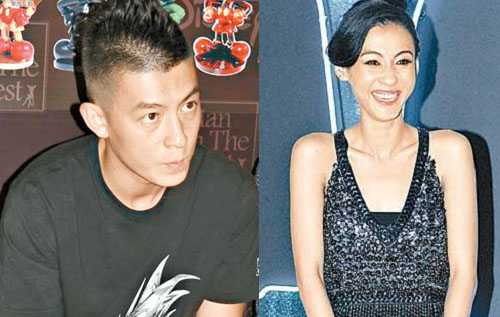 According to Hong Kong’s media reports, Edison Chen (陈冠希) who was allegedly the main culprit that sparked the change in Nicholas Tse (谢霆锋) and Cecilia Cheung’s (张柏芝) marriage, nearly bumped into Nicholas in the Central district a few days ago.

On July 15th, Edison appeared in Shanghai at the same time as Cecilia did. However, upon hearing Cecilia’s name being mentioned, an enraged Edison Chen immediately went black-faced and shouted loudly at the reporter, “Get Out!” This resulted in the press conference having no choice but to be canceled.

Rumors of Nicholas and Cecilia’s troubled marriage first ignited on May 8, 2011 when Cecilia Cheung allegedly asked to be seated next to Edison Chen and even snapped a photo together on the plane.

In fact, Nicholas, Cecilia and Edison’s fate were quite intertwined with each other. The day before yesterday, July 13th, Nicholas went to the Central district to have a haircut and nearly crossed paths with his foe, Edison. After Edison knew that Nicholas was just around the corner, he immediately left the scene in a rush.

Three days later, Edison flew to Shanghai for a press conference and nearly ran into Cecilia, who was attending the Miu Miu fashion show. Coincidentally, Nicholas’ younger sister, Jennifer Tse (谢婷婷), also flew to Shanghai on July 15th to attend an event.  The fate between the Tse, Cheung and Chen families were intertwined was beyond words.

Security Carried Off Reporter By the Collar

Earlier, Cecilia had a great time at the Miu Miu fashion show, coquettishly snapping photos and chatting with other guests. Cecilia also dined and watched the fashion show and magic performance at the same time and left at approximately 10 PM.

It was known that Cecilia had applied for leave from the drama production team of  The Lion Roars Again <河东狮吼II> to fly to Shanghai to attend the Miu Miu fashion show and there were also rumors that Cecilia will be staying behind in Shanghai to prepare for China’s Dragon TV’s <舞林大会>. However, this was certified to be false by the production team as Cecilia had already left Shanghai yesterday and was expected to reach Ningbo in the afternoon to resume work on the set of The Lion Roars Again.

Edison Chen, on the other hand, attended an event yesterday at approximately 11 AM in the morning. Because he and Cecilia had appeared at the same place at the same time, this resulted in plenty of speculation. A reporter thus asked Edison whether he and Cecilia had arranged to meet up and see each other again. Edison who had previously talked in a matter-of-fact voice about the plane incident with Cecilia, immediately turned black-faced upon hearing Cecilia’s name and fumed loudly to the reporter, “Get out of the room!” and indicated to the security guard to chase that reporter out.

The security guard then used his left hand to grab the reporter by the collar and used his right hand to chase the reporter out. Edison Chen, who witnessed this entire scene, actually secretly snickered. Since the remaining media reporters went silent, there was a stale atmosphere, thus ending the press conference on an abrupt note.

After that incident, the reporter (known by his surname as Luo) who was instructed to be chased out by Edison Chen, accepted an interview and said disgruntedly, “Edison Chen’s security guard used his hand to push me out of the door. I said, ‘Don’t push me. I will walk on my own,’ however he still continued to push me out of the door. I think that an artiste can choose not to answer but he (Edison) had no reason to chase me out like that. He doesn’t treat the media with any courtesy. There is a complete lack of respect.”

In other news, Cecilia Cheung continued to rush work the filming of The Lion Roars Again.  Film investor, Yu Yuxing (余毓兴), expressed that Cecilia will likely complete filming by end of August. The film progress has been going on smoothly within expectations, undeterred by Cecilia’s many requests of taking of leave.

The film production team has also accepted Cecilia’s future request of one to two days’ leave to head back to Hong Kong to look after her sons. Meanwhile, Nicholas has been resting at his hotel for the entire day yesterday. There were completely no sign of any movement.

17 comments to Edison Chen Turned Black-Faced Upon Hearing Cecilia Cheung’s Name And Shouted At Reporter, “Get Out!”