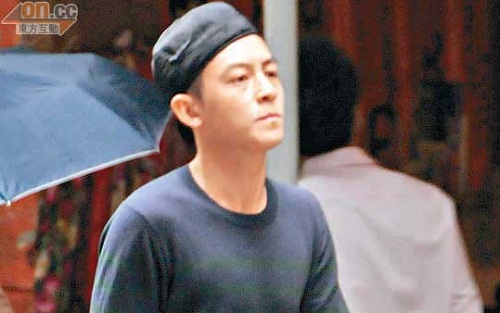 When Nicholas Tse (謝霆鋒) appeared in Central district yesterday, former love rival, Edison Chen (陳冠希) suddenly appeared on the same street. A large group of reporters surrounded Edison, who upon learning of the situation, immediately rushed away. When alerted that he nearly ran into Edison, Nic smiled coldly, apparently not deeming him significant in his eyes.

The love triangle between Nic, Cecilia Cheung (張栢芝), and Edison Chen has not ended. In 2008, nude photos of Cecilia and Edison surfaced, causing good friends, Nic and Edison, to become enemies. Despite decrying Edison for his hypocrisy by compared him to “a cat mourning the death of a mouse,” Cecilia took a friendly photo with Edison when running into him unexpectedly at the airport. This friendly collaboration became the instigating factor in Nic and Cecilia’s divorce.

Wearing a cap and jeans, Nic went to see an orthopedist regarding his old injuries in the Tin Hau district. At approximately 4:40 PM, Nic went to a hair salon in the Central district. Half an hour later, Nic’s “death rival,” Edison walked past the same street. Coincidentally, Edison wore a cap and jeans as well. Both Nic and Edison shared the same taste and unclear whether the similarity was a joy or grief.

Since there were a large number of reporters present waiting for Nic to finish cutting his hair on the street, they immediately chased after Edison when he appeared. Edison stared curiously behind him and thought an incident had occurred. Edison smiled widely. When reporters asked where he was going, Edison looked around and said, “I am still finding my way.” He asked the reporters curiously, “What is everyone doing here?” A reporter said cuttingly, “Your good friend (Nicholas Tse) is in the upstairs salon getting a haircut.”

Edison forced a smile and changed his expression, ignoring the reporters. Continuing to chat with his friend, Edison walked away. A reporter asked, “Did you stay in contact with Cecilia Cheung?” Edison continued to remain silent and shot forward like an arrow into a nearby building, which was only steps away from Nicholas’ location. After learning that Nic was also in Central district, perhaps Edison did not want to waste time [in avoiding him]. Edison lingered less than twenty seconds before darting across the street to escape. His facial expression soured and he intentionally did not look at reporters.

When Nic emerged from the hair salon one hour later after getting a hair cut, reporters stated, “Did you know Edison appeared?” Nic said surprisingly, “Really?” After Nic laughed coldly, a reporter said, “Yes, Edison just walked past this street.” Nic continued coldly, “Many people walk by here.”

Asked whether he was still angry at Edison, Nic maintained his “chok” smile and did not laugh out loud. The reporter changed the topic and asked, “How are you feeling now?” Nic smiled and revealed his teeth, breaking into a wide smile. Before boarding his car, he said, “I’m going back!” Nic returned to his apartment in the Admiralty district. Jayne: I was struck by how tired and Edison looked. He looked so haggard, as if he were the one going through divorce instead of Nic Tse! I wonder what would have happened had the two men come face-to-face. It’s a serious allegation to claim that Edison’s photo collaboration was the instigating factor in Cecilia and Nic’s argument, leading up to their divorce.