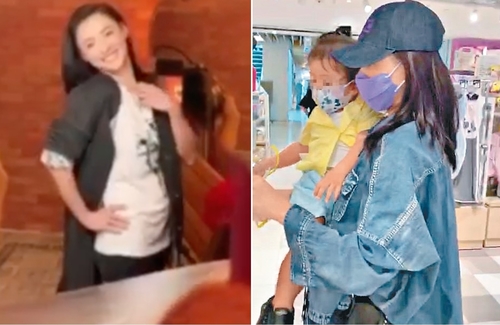 Since giving birth to her third child Marcus Cheung (張禮承) in 2018, Hong Kong actress Cecilia Cheung (張柏芝) has been busy looking after him and her two elder sons Lucas Tse (謝振軒) and Quintus Tse (谢振南). Known to be a loving parent, Cecilia once revealed that her lifetime career is to be a mother while acting is just a job to earn money. Serious about being both a mother and an actress, the 40-year-old often shares tidbits of her personal and work life online. Unexpectedly, her latest social media post showed a fuller belly, prompting speculations that she may be pregnant again. Yesterday, on August 31, Cecilia addressed the rumors after an outing with her youngest son, who is nearly two years old. 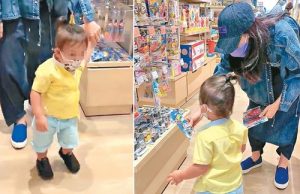 That day, Cecilia took the time out of her hectic schedule to buy groceries and to go toy shopping with Marcus. She wore a full denim outfit while Marcus rocked a yellow t-shirt, denim shorts, and a thin ponytail. He adorably trotted around the toy stores and busied himself with his favorite toy car. Cecilia also appeared to be full of energy as she followed him around while constantly crouching down to communicate with him at eye-level and carrying him at times. In the photos, Cecilia maintained a slender frame and light steps despite the circulating rumors of her carrying a fourth child. 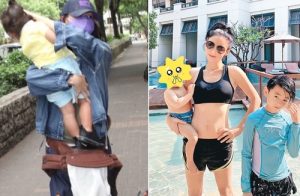 On the car ride home, the actress was quick to deny such rumors by making it clear that three children are enough and that she has fully put a stop on further pregnancies. She asserted in an Instagram video, “I don’t even have to answer it because it’s not true. If I really am pregnant, I wouldn’t have been able to carry a heavy child while wearing a baby carrier. It would have definitely been impossible for a pregnant woman to do that. I can confirm that I am not pregnant now and certainly won’t be in the future!”

Currently juggling her busy life as a single mother and an actress, Cecilia is very hands-on with her children. Despite having domestic helpers, she is in charge of waking up her kids, preparing food for them, and picking them up from school. With her hands full, it seems unlikely that she would strain her energy by chasing for another baby.

3 comments to Cecilia Cheung Denies Being Pregnant with Fourth Baby