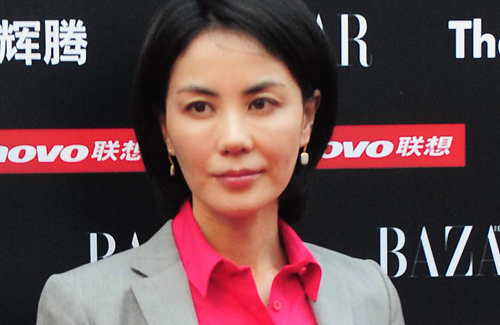 Above: Faye Wong is being ridiculed for being “too old” to date Nicholas Tse.

Without any scheduled appearances until September 28, Nicholas is currently staying in Faye’s house in Beijing. Reuniting their love after a 11-year separation, the couple was photographed kissing and lingering in each other’s embraces while Nicholas cooked in Faye’s kitchen.

Nicholas’ manager, Mani Fok (霍汶希), revealed that Nicholas will be taking on lighter work assignments such as filming ads and making promotional appearances in the next month. He is currently seeking medical care in Beijing to nurse an old leg injury, allowing him more time to rest before filming his next movie in November.

Although Nicholas and Faye’s reunification surprised many, the general public wished the couple happiness together, especially since both suffered through divorces with their respective partners over the last two years.

With Nicholas dedicating more time in his relationship with Faye, Cecilia’s former manager, Tiffany Chan, criticized that Nicholas is an irresponsible and absent father. Tiffany revealed that Cecilia, who no longer has lingering feelings over Nicholas after their divorce, is upset that Nicholas rarely saw their two sons and took little initiative to visit them in Singapore this year.

Tiffany further shared a crude joke, which she claimed to have found on the Internet, over Nicholas and Faye’s 11-year-age gap. “It’s easy to see father and son, Patrick Tse (謝賢) and Nicholas Tse, as having complementary personalities. Old man Patrick’s girlfriend, Coco, is younger than him by 49 years, while Nicholas is dating Faye, who is 11 years older than him. Although true love should not be restricted by age boundaries, I can’t imagine what it would be like for 45-year-old Faye to be crying about her old age when she meets 28-year-old Coco,” Tiffany posted the joke on her Sina Weibo blog today.

Who Should Cecilia Cheung Remarry?

Tiffany continued her sarcastic tone in another compiled online joke about Cecilia’s reaction towards Nicholas and Faye dating again. Tiffany posted, “Today a friend comforted Cecilia…she asked me what to do. I told her: ‘Cecilia, if you don’t want to lose this round pitifully, you should marry Edison Chen (陳冠希). If you want to be tied, you can marry Li Yapeng (李亞鵬) [Faye Wong’s ex-husband]. If you want to win, you should marry Patrick Tse.'”

Over the last 15 years, Tiffany sought to protect Cecilia during the worst crises. Known for her blunt tongue, Tiffany was quick to put down those who hurt Cecilia:

In 1999, Hong Kong triads put a “rape order” on Cecilia after her father, Cheung Yan Yung (張仁勇), failed to repay his gambling debts. Due to her clout in the industry as Charles Heung’s wife, Tiffany reportedly saved Cecilia’s skin by intervening in the situation.

In 2001, Cecilia and Daniel Chan (陳曉東) broke up after he reportedly cheated in their relationship. Tiffany called Daniel a “hateful” liar who used Cecilia for publicity.

In 2002, during the year that Nicholas and Faye were back together after a brief breakup, Cecilia suffered depression. Tiffany’s China Star cast Cecilia in two major movies, Running on Karma <大隻佬> and Lost in Time <忘不了>, the latter which helped Cecilia win Best Actress at the Hong Kong Film Awards.

In 2006, Cecilia ended her management contract with China Star early because she got married to Nicholas and gave birth to their first son, Lucas. Although China Star initially sought Cecilia to pay 15.8 million RMB in losses due to her early contract termination, Tiffany quietly settled the issue with Cecilia outside of court.

In 2008, Tiffany berated Edison Chen (陳冠希) for delaying his public apology after the nude photo scandal, which also involved Cecilia, shook the entertainment industry. Tiffany said she “will never collaborate with Edison Chen”.

In 2014, Tiffany criticized Nicholas in spending little time with his sons, leaving Cecilia with the burden of raising their children. Continuing to support Cecilia, Tiffany announced that China Star will cast her as the deity Nezha in an upcoming film adaptation of Investiture of the Gods <封神榜>.