Jayne: Please DO NOT re-post or hot link the below images directly, otherwise the my account will exceed its bandwidth. Please upload onto your own image album if you would like to share at other forums.

Under the witness of 200 family and friends, Max promised he will love Ada for the rest of his life. The guests were given white umbrellas, upon which they opened them as Ada and Max entered the Hong Kong Baptist church. The gesture was symbolic of the couple walking down life’s path together despite future turbulent winds and rain.

Ten security guards were present at the church grounds. Ada’s own private car, which can accommodate up to 7 people, was utilized as the bridal car. It was decorated with flowers and a pair of stuffed monkey toys.

Ada wore a simple wedding gown and her most eye-catching accessory was a diamond cross pendant necklace. At 5 pm, Ada and Max smiled brilliantly as they emerged from the church to take wedding photos. Although the couple did not accept press interviews, Ada blew a kiss at the reporters. “We’re very happy! Bless everyone! I am grateful to each one of you!”

Light snacks were served, including spring rolls, salad, and shrimp balls. An 8 minute video clip featuring Max Zhang dancing fiercely and Ada in an unsynchronized dance was played continuously at the wedding ceremony. The wedding celebrations continued into the evening as the dinner banquet was served.

Many of Ada’s TVB colleagues and friends from church attended the wedding. Gigi Lai gave the newlyweds housewares as a wedding gift. “I wish Ada and Max much happiness and that they have a baby soon!”

Jessica Hsuan gave the newlyweds a bonsai plant, which Ada had expressed interest in earlier. Jessica laughed and said that when she saw the bonsai plant, she thought of Ada. “Hopefully Ada will have a baby soon. She can then retire and focus on child raising.”

Joe Ma arrived with his wife and indicated that they bought the newlyweds a box of heart shaped chocolates.

Despite his recent low-profile, Lawrence Ng was present at Ada and Max’s wedding. Lawrence said Ada and Max matched each other very well. He also praised Max for being a gentleman and talented in martial arts as well. However, Lawrence arrived at the ceremony late and left early, since he had to catch a flight leaving Hong Kong.

Liu Kai Chi’s wife, Chan Man Yee cried at Ada’s wedding. “God was present at Ada and Max’s wedding. Ada and Max are very loving towards each other; they should continue to cherish this love.” Chan Man Yee said the guests often erupted into cheers during the wedding celebration, similar to the excitement present at a concert.

Kenix Kwok gave the newlyweds a happiness ferris wheel, which was a very thoughtful gift. Did Kenix think that Ada was very brave in announcing her marriage in such a public manner? Kenix said, “True love will give you courage.
Mutual respect and understanding is the most important thing in a marriage.”

Charmaine Sheh gave a crystal gift. Was Charmaine envious of Ada? Charmaine looked at the reporters and quickly left after saying goodbye. Attending without the presence of her boyfriend, Gregory Lee, Shirley Yeung said she gave the newlyweds her blessings.

Jayne: Ada and Max’s wedding ceremony appears to be very simple. Many celebrity weddings are known for their lavishness, so it is a refreshing change to see Ada and Max’s celebration to be so understated. I like Ada’s wedding gown, but wish she didn’t wear the ivy garland in her hair. 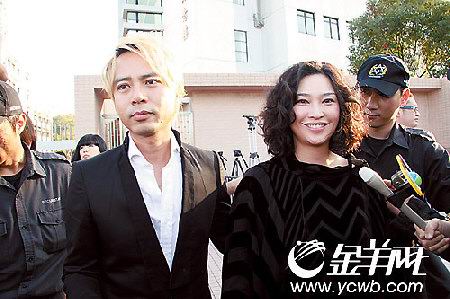