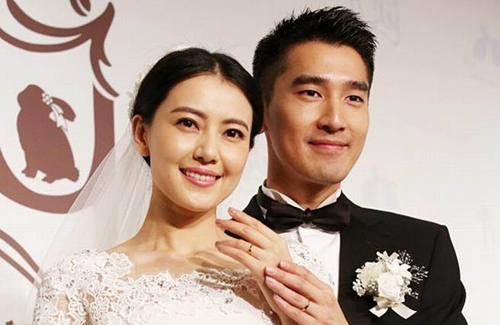 Despite their five-year age gap, 35-year-old Yuanyuan and 30-year-old Mark knew they were destined for each other early in their relationship. Yuanyuan spoke of Mark, “It’s because I feel like I met someone who shares my system of values, who is extremely similar to me.”

Frequently taking vacations together, the couple announced that they had marriage intentions earlier this year. In May, Yuanyuan and Mark traveled to Paris to take their wedding photos. In June, the couple registered their marriage in Beijing.

The couple fell in love on the set of director Chen Kaige‘s (陳凱歌) Caught in the Web <搜索> in 2012. For the wedding, Chen was invited to be the couple’s witness as they exchanged wedding vows and rings.

Through tears and smiles, Mark recalled his emotions when giving his vow, “Actually, I was drawing blanks during that time. I just spoke what I was feeling and told Yuanyuan the feelings from the bottom of my heart. I told her that I would be honest with her, and I would put her along with my family as the most important people in my life.”

The bride also gushed, “Mark, our love stemmed from a sad story, as we are often separated long distance. I knew that we loved each other from separate cities, but I love you. As long as you are present, our home can be anywhere. [My friends] often said that my ideal man doesn’t exist. But you exceeded all my expectations of any man! Wherever you go, I will follow you and continue to love you, as well as love your family. I have many beautiful visions of the future. Like the movie, Up, our lives are fixed inside…. I will continue to love you during good and bad times, until the end of life.”

Wearing a custom designed wedding gown by Chloe, Yuanyuan, who normally has a very slim figure, appeared to be slightly fuller than usual in her mid-section. Asked future baby plans, Mark denounced the pregnancy rumors and expressed, “Of course we have plans, but let us finish filming our projects first. We had to especially take time off for the wedding, and I have to go back to work!” Despite the couple’s busy schedule, they planned each wedding detail with care. Since Yuanyuan is particularly fond of small animals, Mark decided on a forest backdrop with a picture of two large bunnies. Besides Yuanyuan’s love for wild creatures, Mark revealed the significant meaning behind the bunny theme – when they were dating, Mark gave Yuanyuan a book about bunnies as their first keepsake.

During the bouquet toss, Yuanyuan wanted to toss the flowers at good friend Angelababy but missed. Yuanyuan said, “I feel sorry about Angelababy. I wanted to throw her the bouquet, but I didn’t practice and my bridesmaids were too skilled.”