Tying the knot in 2014, Taiwanese actor Mark Chao (趙又廷) and mainland Chinese actress Gao Yuanyuan (高圆圆) have been married for six years. The lovebirds have been busy building happy family memories with their daughter, whom they welcomed into the world last year. Since their dating stages, the couple has been very low-profile and protective of their privacy, so it’s often a treat when Mark shares tidbits of his life with the public. Recently, he sat down for an interview and talked in-depth about his role in the family.

Mark expressed that there is a clear division of responsibilities between himself and Yuanyuan: he is responsible for handling matters outside, while she is in charge of household matters. He explained that while he has no problems doing chores, he will struggle with buying daily necessities because he does not know which one is good. As such, he lets his wife handle these basic tasks since she is the master of managing domestic affairs. However, Mark is also supportive of Yuanyuan making a film comeback. He said, “I’m her fan, so I’ve always been encouraging her. Our baby has also settled down, so she can make a return if she wants to.” 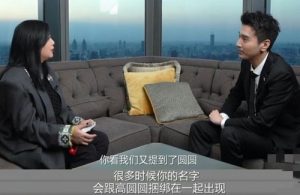 As Yuanyuan is well-known in the industry for her award-winning performances, Mark is often referred to as Yuanyuan’s husband by others. When asked if that hurts his pride, the actor responded, “Of course not, it is such a wonderful thing! Besides, it’s the truth.”

What’s important is that they feel a sense of security with each other. Getting married and building a family are happy and natural life events, and for that reason alone, Mark said he feels very calm and stable. He believes that this radiating sense of security might be the characteristic that Yuanyuan got attracted to. Similarly, he said he also feels very secure with her and emphasized the importance of trusting and relying on each other. “We are husband and wife, but at the same time we are also each other’s best friend,” Mark stated.