The Ideal City is an adaptation of office life novel Her Warfare <苏筱的战争>, and the story follows cost engineer Su Xiao (played by Sun Li) as she navigates workplace issues while climbing up the corporate ladder in the architecture industry. In the beginning, Su Xiao is forced to resign due to complications involving a business partner. Under fateful circumstances, she manages to get a job at Tiancheng Construction, a subsidiary of Yinghai Group. There, she has to adapt to a high-pressure work environment. 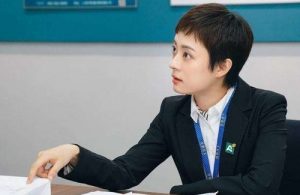 Su Xiao also faces intense challenges such as the provocation of Tianke Construction’s talented economist Xia Ming (played by Mark), who strongly believes that a clean cost table equals an immaculate project. Working on opposing sides, Su Xiao and Xia Ming engage in a fierce battle of wits and courage, putting everything that they have on the table. Eventually, they achieve great success in their careers and learn to welcome new, refreshed perspectives and ideals in their personal and work lives.

As the series revolves around the architecture industry, the production team sought to portray that world accurately by rigorously researching industry knowledge and professional terms. All research was cross-referenced with experts in the field to ensure The Ideal City is as realistic as possible.

Award-winning director Liu Jin (刘进), who took home the Best Director title at the 24th Shanghai TV Festival for White Deer Plain <白鹿原>, will be helming the series. His other notable works in television include The Brink <悬崖> and One Servant of Two Masters <一仆二主>. Well-known screenwriter Wu Zhaolong (吴兆龙), who served as a head writer for Yongzheng Dynasty <雍正王朝>, is also taking part in this project as editor-in-chief. Meanwhile, Gong Yu (龚宇), the founder and CEO of iQiyi, and Dai Ying (戴莹), the vice president of iQiyi, are the respective executive producer and producer.

Furthermore, Zhao Wenzhu (赵文竹), the president of Transmit Media Entertainment and the general manager of Khorgas Houhai Culture Media Co., is the co-producer. She has worked on several popular and notable TV series, including Three Kingdoms <新三国>, The Lost Tomb <盗墓笔记>, and variety shows Give Me Five <高能少年团> and Yes, I Do <喜欢你我也是>.