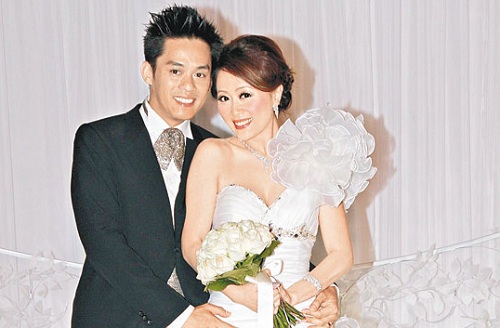 Former TVB actress, Sherming Yiu (姚樂怡), and Alan Wu (吳俊匡) held their wedding celebration on April 26, 2012. The lively 30-table banquet took place at the Ritz Carlton Hotel in Hong Kong. The bride wore $5 million HKD in sparkling jewelry, including a 1.5 carat diamond ring. The groom was a good sport, enduring the torturous games devised by the bridesmaids, proving that Sherming was not an easy woman to win her hand in marriage!

Best known for her role in TVB drama, Armed Reaction < 陀槍師姐>, Sherming has since retired from acting and currently worked in the wedding planning sector. Raised in the Netherlands, Alan worked outside the entertainment industry as well. The couple has been dating for 8 years. During the morning bridal games, Angela led the bridesmaids in torturing the groom mercilessly. When it was discovered that Alan’s legs were quite hairless, he was forced to take off his shirt. Angela mercilessly stuck a hair removal pad on Alan’s armpit, saying mischievously, “I know Sherming is afraid of underarm hair, so I am cleaning him up for tonight!” Alan’s groomsmen were forced to remove the hair on their chest! Toby Leung revealed that the bride actually came up with the idea for the game!

The groom was also asked to “French kiss” a photo of Eric Tsang (曾志偉), in which Alan had to place his tongue on Eric’s tongue! Regarding Sherming as one of his daughters, Eric was especially jovial last night. He vowed that he will not leave the wedding banquet without getting drunk!

Alan revealed the additional tortures the bridesmaids had devised for him, “It was very difficult! I had to down a mixed drink which contained sweet, sour, bitter, and spicy flavors. The drink had wasabi, wine, and banana in it as well!” Sherming did not feel pity for her husband, enjoying the good humor of the bridal games. Sherming said, “It’s okay! He will know how to cherish me; it is not that easy to win my hand in marriage!”

Sherming said that the groom made a love declaration that he will give all his money to her. “He will only allow himself $20 to spend everyday. Alan also promised to run in the opposite direction when he sees other beautiful women,” Sherming said. However, Alan laughed and said, “I don’t think I said that! I only said that I love Sherming!”

Since Chin Ka Lok (錢嘉樂) was working and unable to attend the wedding, Angela Tong was let “loose” and played uninhibitedly. Angela was unafraid that revenge will be enacted at her own future wedding. Asked whether she was afraid that Alan will be further tortured at the wedding banquet, Sherming said that the tactic would be to get Angela drunk as soon as possible!

Sherming and Alan indicated that they were ready to have children at any time. While speaking with reporters, Sherming often touched her stomach. Asked whether she was currently pregnant, she said, “I want to be like Annie Man too! I can have a child at any time and wish to do so. When I become pregnant, I will probably announce it before 3 months time since I will be unable to contain my happiness!”

The couple will hold an additional 100-table wedding banquet on April 29th in the Walled Village of Hong Kong, which was Alan’s family’s hometown. Afterward, the couple will fly to Las Vegas, USA to obtain their marriage certificate and enjoy their honeymoon there. Jayne: Sounds like a fun wedding! It must have been hilarious (although a bit messy) for the bridesmaids to give the groom a hair removal treatment!