On the morning of October 1, 2011, Sonija Kwok (郭羨妮) posted a wedding photo with her ​​boyfriend, Zhu Shaojie (朱少杰), on her blog while announcing, “Today we got married!” The couple held a small, intimate wedding reception in Guam with the attendance of family members and did not invite friends from the entertainment industry to the reception.

During the filming of mainland series Lock Heart Jade Palace <宫锁心玉> last year, 37-year-old Sonija secretly fell in love with the drama’s action choreographer, Zhu Shaojie. After dating for six months, the couple decided to get married this year. Zhu Shaojie frankly admitted that he did not mind Sonija’s past [filled with negative rumors], “I am truly happy that I was able to find her!” Passionately in love, Sonija noted that she will cherish her ​​husband and will definitely have children after marriage, causing others to envy the couple! TVB executive, Virginia Lok (樂易玲), revealed that Sonija was currently filming a mainland series. Since the producer of the series was Sonija’s husband, Zhu Shaojie, it was easier to schedule the wedding. Ms. Lok revealed that Sonija returned to Hong Kong on September 28th for her wedding gown fitting. Ms. Lok noted, “Sonija wished to have only her family present on her wedding day. She will return to Beijing to resume filming and will hold a large wedding banquet inviting her family and friends then.”

Regarding Sonija’s contract with TVB, Ms. Lok said, “There is still some time left in Sonija’s contract. Thus, she will be flying between Hong Kong and mainland China. Sonija had a turbulent love life in the past. Since she found a qualified person to love her now, I am grateful for her happiness!”

Sonija’s good friends, Charmaine Sheh (佘詩曼), Sharon Chan (陳敏之), Steven Ma (馬浚偉), Michael Miu (苗僑偉), and wife, Jamie Chik (戚美珍) were happy for the newlyweds although they were unable to attend the wedding ceremony in Guam. Currently filming in Mongolia, Charmaine noted that it was a joy to finally find true love and wished the couple a lifetime of happiness. Sharon congratulated Sonija, “Earlier, Sonija noted that she wished to hold a low-profile wedding and will only invite family members and not us. When she returns to Hong Kong, we will definitely have dinner to celebrate! I wish that she will have children soon; I know she wants to also!”

Steven said he was very happy for Sonija, who revealed her marriage intentions to him earlier. At this time, Steven will not bother Sonija and will only pass a message to her. Asked what gift he will give to the bride, Steven said, “Since this gift requires time to prepare and I will be working in Hengdian next month, I will be able to give her the gift in person.”

Michael Miu indicated that during the filming of Men and Women’s Dwelling Choice <抉宅男女>, Sonija had already revealed her marriage intentions. Michael joked that he had dispensed marriage advice to Sonija, in which he advised that withdrawing a step back would clear the air [during marital arguments].

Regarding Sonija’s wedding, ex-boyfriend, Deric Wan (溫兆倫) indicated that he was in a meeting the entire day yesterday and did not have a chance to read the news. Thus, Deric noted, “I have no comments.” Rumored with Sonija in the past, Michael Tao (陶大宇) also did not comment on Sonija’s wedding news.

Jayne: Sonija has a nice figure and elegant features to carry wedding gowns very well. Look forward to her larger wedding banquet in Beijing and possibly more wedding photos to look through!

Btw, why does Ms. Lok have to bring up Sonija’s “turbulent love life” from the past? It seemed inappropriate to mix in the wedding congratulations, which did not seem to ring true. In addition, Sonija’s worst negative rumors were being accused with Michael Tao, which is difficult to say whether they were true or not. However, Michael Tao and Sonija do not appear to be on speaking terms anymore and Michael still appears to upset each time Sonija’s name is brought up. 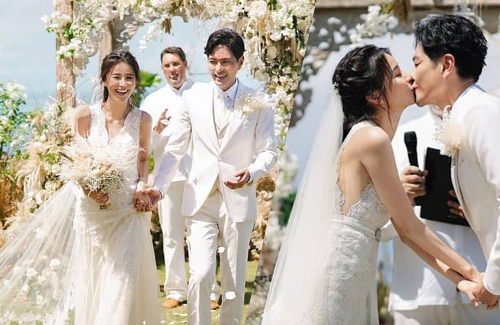