Charmaine Sheh and Kenneth Ma Has Loving Chemistry on Set 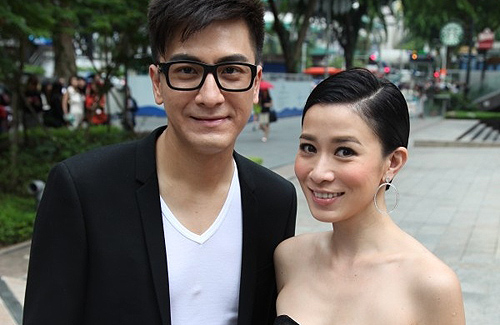 Kenneth portrays an honest young man who falls in love with his demanding boss, Charmaine. Filming earlier this week in Singapore, Charmaine was seen wearing a black ballroom gown while holding a few shopping bags. In the scene, Charmaine asked Kenneth to be her temporary partner for the night so she can trash her ex-boyfriend’s wedding. A misunderstanding ensued, and Charmaine began yelling at Kenneth, pointing fingers at him and tossing her shopping bags for Kenneth to hold.

Though the first-time collaborators will not have any intimate scenes to film, Kenneth revealed that there will be modest romantic scenes. Charmaine will also kiss him on the cheek.

With their good chemistry on set, Charmaine was faced with new rumors that claimed she was involved in Kenneth’s love rectangle with Tracy Chu (朱千雪) and Rebecca Zhu (朱晨麗). “I’ll just treat it as promotion,” Kenneth said. “We already knew that we would be followed by paparazzi, but really, I want to thank the media for giving me so much face. They’re always saying that I have girls chasing after me. I hope other actresses don’t mind!”

As for his thoughts on working with Charmaine for the first time, Kenneth said, “She is a very professional actress. She’s also gorgeous! There was this scene where I had to carry her and she was very light. It was very comfortable.”

How was the chemistry on set? “Oh, we have a lot! We would add these extra little gestures and subtle actions in some of our scenes. We get along really well.” Asked if Kenneth considered Charmaine to be a friend, he said, “In the past when we see each other we would greet each other with a nod in the head, but now we would chat.”

Produced for $10 million HKD, A Time of Love consists of four separate storylines and features stars from Hong Kong, Japan, Korea, and Taiwan. It is slated to air during the Lunar Near Year time slot for four consecutive Sunday nights starting January 26.