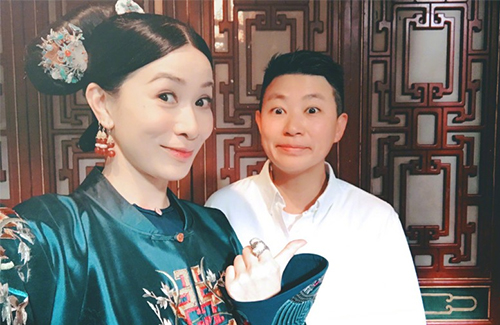 Charmaine Sheh’s (佘詩曼) manager Joanne Chan (陳早茵), daughter of actor Philip Chan (陳欣健), was a huge reason to why Charmaine accepted the offer to star in Story of Yanxi Palace <延禧攻略>. Some say Joanne may even be interested in dating her.

According to a new rumor that is circulating among Hong Kong entertainment’s gossip circle, Charmaine—who played Consort Xian in the hit Chinese palace drama Story of Yanxi Palace—initially wanted to turn down the drama when she was first offered to star. Allegedly, Charmaine didn’t find the role too groundbreaking, as she has starred in a similar palace intrigue drama, the uber-successful War and Beauty <金枝慾孽>, back in 2004. It was Joanne—Belinda Hamnett’s (韓君婷) rumored ex-girlfriend—who convinced Charmaine to accept the offer.

It was a choice Charmaine definitely did not regret—exploding with popularity throughout Greater China, Charmaine has earned over HK$60 million in the last six months thanks to the drama’s success.

A source close to Charmaine and Joanne said they have gotten very close over the last few years. Joanne was available to take care of Charmaine 24/7, and she has been seen buying many gifts for Charmaine’s mother. The source added that Joanne may be interested in Charmaine, and that she’s trying to pursue her.

In regard to these rumors, Charmaine said, “I’m not going to respond to things that aren’t true!”