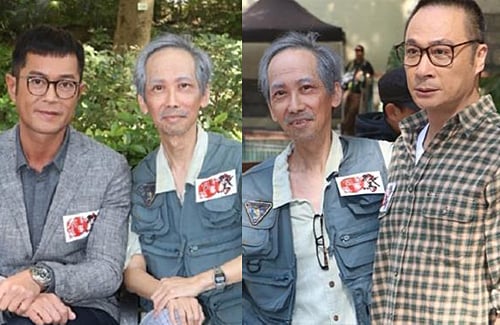 Cheung Tat Ming during the filming of “A Home Without a View”.

In 2012, Cheung Tat Ming (張達明) battled nasopharyngeal cancer and has since recovered. The 54-year-old actor is incredibly grateful for Francis Ng (吴镇宇), Andy Lau (劉德華), and Louis Koo’s (古天樂) support during the time when he was struggling with cancer.

Recently busy with promoting his new film A Home with a View <家和萬事驚>, which he also produced, Tat Ming thanked Francis for agreeing to star in the project. Francis accompanied him on medical appointments, and introduced Chow Yun Fat (周潤發) to Tat Ming so they can go jogging together to improve his health.

During the past seven years of fighting cancer, Tat Ming couldn’t work for lengthy periods because of his declining health and frequent treatments. He struggled to pay bills and support the family. His divorce with clinical psychologist Ho Nim Chi (何念慈) in 2016 was also a heartbreaking experience, leaving him with greater difficulties. But his good friend, Louis Koo, helped pay for his medical bills. Andy Lau also hired Tat Ming to write scripts for his film company.

Admitting that his cancer treatment wasn’t easy, Tat Ming became very moody due to the side effects of his medications. But each time he felt pain, he would think of his son and daughter as his motivation to continue living as he wants to see them grow up.

Although he recovered from cancer, Tat Ming’s 15-year marriage ended in 2016. He said that he and his wife’s values in life are no longer the same and they decided on the split.

“A Home With a View”

His new movie, A Home with a View, is a revised version of the actor’s past award-winning stage show Ah Dum’s Days of Looking at the Sea <亞Dum一家看海的日子> . It revolves around a family focusing and working hard to live at a home that has a beautiful ocean view. The family consists of a patriarchal father (Francis Ng), mentally unstable mother (Anita Yuen), disabled grandfather (Cheung Tat Ming), unemployed son and a daughter going through puberty. Set in an old-age flat of a noisy and cramped neighborhood, each member of the family faces their own struggles of living, making anger and frustration a common trait within everyone. As conflict arises, the ocean view often calms them down, but when it was blocked by a billboard, things get out of hand, and they come together and fight with the rooftop house owner (Louis Koo) to remove it.

Tat Ming is specifically thankful for Francis and Louis for be so willing in helping him accomplish his dream in producing a movie by not only providing funds, but also starring in it. He said, “I gave the script for Francis to have a look and he said it sounds good, and agreed to be the main lead.”