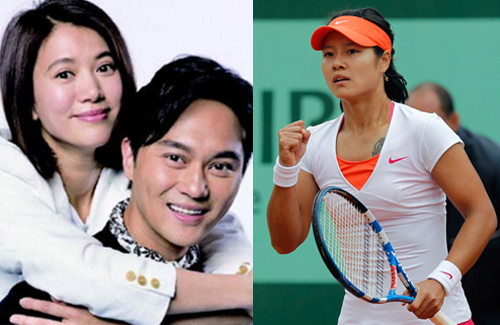 Since Chilam Cheung‘s (張智霖) participation in the Mainland Chinese reality television program, With You All The Way <一路上有你> with his wife, Anita Yuen (袁詠儀), the couple’s popularity has skyrocketed. The sincere and heartwarming love they display for each other on television has won them many fans. Chilam and Anita have reportedly been invited to participate in another Mainland Chinese reality television program, Come Champion <來吧冠軍>, where they will have the opportunity to play tennis with renowned tennis player Li Na (李娜) and her husband-coach, Jiang Shan (姜山).

Chilam and Anita will be filming their episode in February. To prepare for the intense match, the couple has been engaged in regular tennis training and fitness workouts. In the episode, they will start with a friendly match against each other to warm up, and subsequently take part in an obstacle course, before finally meeting Li Na and Jiang Shan in a doubles match.

Chilam confirmed his participation in the new television show and expressed, “I’m really looking forward to it. I used to play tennis regularly. But this match will mainly be for the sake of entertainment. I’ve actually sparred with a professional tennis player before. I previously had the chance to play with Boris Becker.”

Looking forward to meeting Li Na, Chilam said, “We can be friends, and I can show her around Hong Kong. I can introduce all of Hong Kong’s good food, shopping and scenery to her. I’m well-versed in that area!”

Finally, Chilam said, “Apart from competing in a tennis match, there will be other elements to the show. I won’t be revealing too much, so that all the participants will be in for a big surprise!”