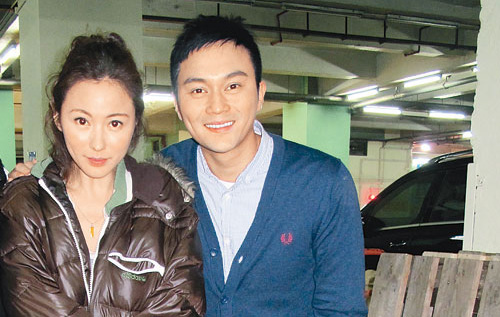 Reunited with his former music video costar, Annie Liu, in Natural Born Lovers, Chilam Cheung explained that their kissing scenes were necessary to portray the love feeling between their characters in the movie. While he was happy to work with Annie again, Chilam jokingly complained that Patrick Kong had failed to deliver on the promise to prevent late night filming hours. To meet production schedule deadlines, the cast and crew have worked through the morning on several occasions.

It appeared that Chilam will be busily occupied in the months ahead, as he will be releasing a music album mid-year. Renown talent manager, Paco Wong (黄柏高), recently joined Chilam’s music company, Neway Star Music. Chilam expressed delight in working with Paco after a 10-year hiatus. “I trust Paco Wong very much. The most important thing is to have good songs, which is more important than winning awards!”

Annie was asked how she felt while kissing Chilam in the elevator for a scene in Natural Born Lovers. Annie noted, “The feeling was quite good. We completed filming quickly.” The 30-year-old revealed that she was frequently drilled about her love life recently.When Chilam’s wife, Anita Yuen (袁詠儀), brought their son, Morton, to visit the set, Morton even vowed to be her matchmaker when he realized Annie was unmarried!

However, Annie did not appear to be in a rush to date for the sake of companionship, instead trusting fate to let her encounter the right person first. “My mother did not rush me. Women do not have to date and get married!” Annie professed that her introverted personality made it difficult to meet romantic prospects.

Jayne: Filming for “Natural Born Lovers” should wrap up soon. Chilam will be seen in Wong Kar Wai’s upcoming “The Grandmaster” as well!