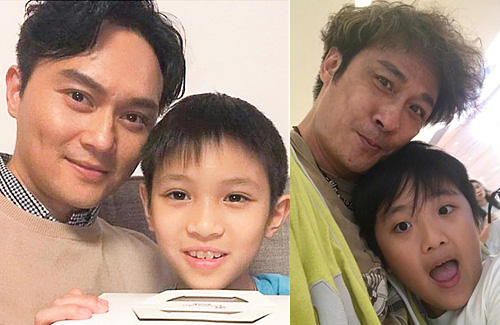 After Triumph in the Skies 2 <衝上雲霄 2>, Chilam Cheung (張智霖) and Francis Ng (吳鎮宇) collaborates again in the latest police thriller The Leaker <洩密者們>.

When mentioned together, many fans would often link them back to Triumph in the Skies 2 as the series’ legendary pilots, but in reality, the pair’s very first collaboration was in 1997. In a movie called Theft Under the Sun <豪情蓋天>, Chilam played a role as an under-cover cop and Francis played a psychiatrist with a stutter. Thinking back, Chilam said there were very little scenes between the two at that time and their one scene lasted for a split second.

Like-wise in Triumph in the Skies where the two had polar opposite personalities, the two will be playing cops from two very different places – Francis, a police officer from Hong Kong versus Chilam, who is playing a cop from Malaysia.

A straight-forward and quiet cop hailing from Malaysia, Chilam plays an officer who abides by the rules and attends to his superior’s orders at all times. In stark contrast to Chilam’s classic cop personality, Francis never plays by the rules and will always have his own way of solving the crime even if he has to use the most extreme methods.

Both are Good Fathers

While the pair’s personalities are complete opposites in The Leaker, in real life, Chilam and Francis are both good fathers who enjoy talking about their sons. Preferring to treat his son more like a friend, Francis said he often brings his son to work with him so that he understands what it is like on the set. However, Chilam never lets his son accompany him to work because he does not want the staff to look after him at all times.

Chilam maintains an excellent father-son relationship with Morton, expressing that they often share secrets with each other. Chilam revealed, “I have a lot of secrets with him, and I’m very tight-lipped so he often tells me things that he wouldn’t tell Anita Yuen (袁詠儀). I play the relaxed guy – as long as you don’t scold them often, children will often tell you their secrets.”

On scolding less, Francis agrees that children should be taught with patience rather than blatantly yelling at them. He stressed, “No matter how wrong they are, you have to keep an open ear so they can let you know the whole story, then you can find a good way to educate them and let them know what’s right. For example, if your son finds and picks up dog poop to eat, it’s very funny to be honest, but you shouldn’t yell at them – you need to find out how they felt about it, or what it tastes like and then tell them that it’s wrong.”

10 comments to Chilam Cheung versus Francis Ng as Fathers