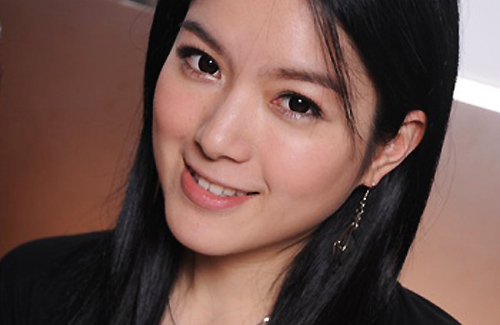 Christine Kuo (苟芸慧) is known for her pure goddess image, but the Miss Chinese International beauty is also ironically a frequent subject of love rumors. In her four years in the entertainment circle, Christine has been falsely linked with Kevin Cheng (鄭嘉穎), Michael Tse (謝天華), Matthew Ko (高鈞賢), diving expert Stephen Au, and recently Aaron Kwok (郭富城). Plagued with romantic fabrications, Christine admitted the rumors had an effect on her outlook in life and she developed depressive symptoms as a result.

In a sit-in interview with Public Relations queen Lelia Chow (周美鳳) for Oriental Sunday, Christine once again clarified her relationship with Aaron and spoke about her struggles in Hong Kong’s hostile entertainment industry.

Christine Clarifies Her Relationship With Aaron

“It is part of the package,” Christine said when she was asked if her rumors with Aaron were true. “In the entertainment industry, rumors come as a package. To put things in a more optimistic way, rumors are a way of saying that you are valuable to the industry.”

Christine saw Aaron as someone who is extremely open-minded, kind, and easy to get along with. “His personality resembles mine. We get along comfortably, but we are not so close to the point where I can comment on his disposition. But he is a senior I respect very much.” Asked if Christine has Aaron’s phone number, Christine expressed that she is much closer to Siu Mei (小美), Aaron’s manager.

How would Christine describe her relationship with Aaron? “We are colleagues that have collaborated before,” said Christine simply.

Christine was rumored to be the third wheel in Aaron’s relationship with former girlfriend of seven years Lynn Hung (熊黛林), who recently announced their breakup through Weibo. Christine’s rumors with Aaron were further fueled when she was spotted attending Aaron’s recent Hong Kong Coliseum concert.

“I went because there is nothing between us. If I didn’t, that would just make things fishier.”

Christine expressed that she did not know that Aaron and Lynn were dating until after she collaborated with Aaron and read the news. The 29-year-old laughed at the reports claiming that Lynn wanted to get rid of Christine with the Beggar Sect’s “dog-beating staff technique” (Christine’s surname, Kuo, is a homophone of “dog” in Cantonese).

“I think that’s quite creative! It’s pretty funny. Since my work is about entertaining others, I’ll just treat that report as a piece of entertainment for everyone.”

Christine stressed that she would not feel awkward if she meets Lynn. “I didn’t do anything. What is there to be afraid of?”

Christine fell into tears when the tabloids widely reported on her alleged car-shaking relationship with Michael Tse last summer. “I was filming for both Tiger Cubs <飛虎> and Ghetto Justice 2 <怒火街頭2> at the same time. I had five cover stories in less than one month. When they weren’t love rumors, they were rumors of discord with my costars, and there was something new coming out every day. I had to make press statements, and I didn’t reserve any time for myself to rest and think. I felt very innocent, helpless, and I didn’t know what to do. I was not expecting a simple car seduction scene from a drama to be written in that way. For a woman, it really harms our reputation! It was too overboard!”

However, Christine did not give in to any second thoughts about leaving the industry to return home, to Canada. “If I left, that meant I lost to [the paparazzi]. I’ll rather spend my time to prove innocence.”

If it wasn’t for Christine’s mother, who encouraged her to compete for the Miss Chinese Toronto Pageant in 2008, Christine would have never competed for the Miss Chinese International Pageant, and would not have joined the entertainment industry. “I was a tomboy. Before coming to Hong Kong, I never had to put makeup on my face before. When I went to work, I dressed casually. Canada is a very relaxed place, and there was no need to dress up.”

Since joining the Hong Kong entertainment arena, Christine had tried going with thirty hours without sleep, which she described as an experience that “literally sucked out my soul at the end of the day…when people called me I couldn’t even hear them. I was just a shell.”

Christine had also experienced betrayal. “I see it as part of growing up. Some people treated me nicely, but others only did it to get something out of me. It takes a while to learn how to handle them.”

No Plans for Dating

Following Christine’s rumor with Aaron, the Taiwan-born beauty was then claimed to be romantically involved with married businessman Stephen Au, who opened a diving school in Hong Kong.

“He is my diving instructor. He has instructed many colleagues in the entertainment industry before, such as Michael Tse. I believe that I am not active enough, so I decided to take horse riding and diving lessons, hoping that these talents will help me with my career.”

After her rumors with Michael, Christine’s parents had wanted her to retire from the industry. “They knew about my hectic work schedule and were greatly offended by the tabloid rumors, but now, they are beginning to understand the ways of the game. They trust and support me.”

If Christine were to choose again, she prefers dating someone who does not belong to the entertainment business. Asked if she had pursuers, Christine admitted that she had some. “However, my career comes first. I really don’t want to date anyone at the moment.”

44 comments to Christine Kuo: “Aaron Kwok is Just a Colleague!”