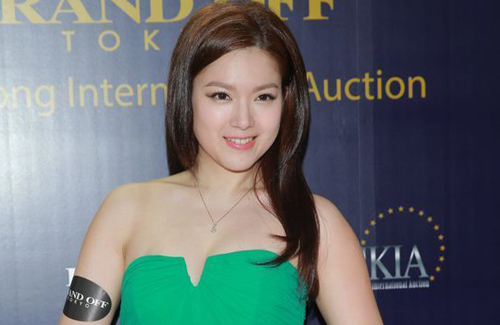 Christine Kuo (苟芸慧)  is currently on hiatus to recover from hypothyroidism – a hormonal disorder that was the cause of her extra pounds. She has been diligently trying to lose enough weight to look fit on the TV screen. Even though she hopes to take a real vacation by travelling overseas, TVB has apparently made plans for her comeback and is discouraging her from taking further time off.

Christine became victim of tabloid slanders, which linked her with Aaron Kwok (郭富城). Despite repeated denial, the press was keen on depicting her as a boyfriend stealer, tarnishing her public image. Her weight quickly ballooned during this time, and her rounded figure became the target of ridicule. Some even speculated that her acting career may be over.

Despite exhausting all methods of weight loss, Christine saw little progress. This setback pushed her further into depression and she spent her days in hiding. She eventually met with a doctor and was diagnosed with hypothyroidism. Taking a month off to recuperate under the care of her family and friends in Canada, Christine has renewed her spirits and is ready to once again to face the public.

She attended a local auction on February 25. Although looking slimmer than before, Christine is not yet satisfied with her appearance and vows to continue her weight-loss efforts. “I still look a bit wide and big on camera. I hope to achieve a weight that is acceptable by TV standards.” The 30-year-old reportedly hopes to drop her weight to 110 pounds.

During her weight gain, Christine lost all of her beauty sponsors. Unhappily losing out all her jobs, Christine took up dancing in hopes of shedding some pounds. After seeing her successfully slimming down, many new health and fitness companies are interested in signing Christine.

Speaking about her condition, Christine admits that she suffered a lot of stress from her job and thanked her friends for their support during the rough times. Even though her weight gain has deeply affected her self esteem, she now understands the cause and has learned to properly manage her health. She has also recovered mentally, feeling more motivated and optimistic.

Even though Christine is making a gradual return to work, she actually wanted to take a longer break to continue her studies in Canada. While TVB has been accommodating in the past, the company denied her request this time around in order to accelerate her comeback. With the highly anticipated Tiger Cubs 2 <飛虎II> scheduled to air this year, Christine’s return is certainly timely.

This article is written by Katrine and Su for JayneStars.com.

28 comments to Christine Kuo Faces Pressure to Return to Work