Christine Ng Allegedly Fell Out With Joel Chan On His Birthday 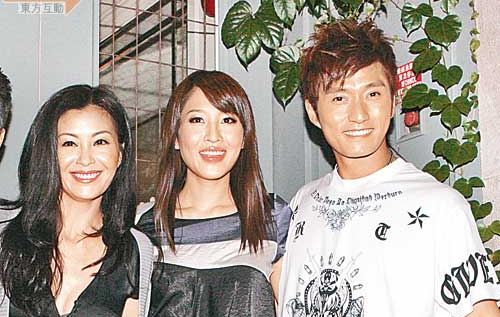 TVB Artiste Joel Chan (陳山聰) stepped into his 35th birthday at the strike of midnight the day before yesterday and was overwhelmed with several messages of birthday greetings via popular Chinese social micro-blogging site, Weibo, sent by friends from the entertainment circle.

It was known that Christine had committed this puzzling act as a friend of hers had told her not to contact him anymore, hence affecting Christine’s mood to change drastically and causing her to “hit the roof”.

An enraged Christine even professed that she would bid farewell to this friend of hers, thus incurring rife speculations from the outside world on who that friend was!

On the other hand, Joel’s girlfriend, Macau casino heiress Florinda Ho (何超雲) had instead defended her boyfriend Joel for being a good person.

Yesterday, around dawn,  Joel Chan uploaded a photo which showed him holding up a birthday balloon onto Weibo, in a bid to announce that it was his birthday on that fateful day. Soon after Joel had posted that photo, many of his friends from the industry, which included his elder god sister, Christine Ng, and younger god sister, Sharon Chan (陳敏之), left messages of birthday greetings to congratulate him.

Whereas Joel’s girlfriend, Florinda Ho, uploaded a photo of a birthday cake which bore her resemblance and carried a unique design, onto Weibo at 5AM in the morning to wish Joel a happy birthday. Upon seeing Florinda’s message, Joel immediately reverted a message which read, “Thx, my love!”, back to his girlfriend.

However, coincidentally, twenty minutes before Florinda had written her birthday message to Joel, it was discovered that Christine had abruptly left a saddening message on her own Weibo wall.

That message cited, “Received a call before I slept. A friend of mine had called me up to tell me not to find him anymore, feeling enraged! I have already bid farewell to him! Too heart wrenching! Is your conscience feeding you well?”

It was unearthed that after Christine left the message above, she deleted her birthday message to Joel and even stopped “following”「關注」him on Weibo. After Christine’s saddening message was posted on Weibo, quite a few of her good friends opened their virtual voices, expressing their strong support for her. Best friend Sharon Chan even wrote a message to console Christine, “Somebody has already let all that money get to his head!…

From now onwards, we shall go our own separate ways!”. After which, Sharon followed suit by deleting her birthday message to Joel and “unfollowed” him on Weibo.

Faced with the consolation and explicit support thrown by her friends, Christine, who has always been known to be tough-as-nails, typed another message on her Weibo wall, “It turned out that friendship is actually equal as we had previously brushed past each other.”

Oriental Daily called up Christine Ng yesterday in a bid to clarify matters. The reporter then directly asked Christine whether the said friend she was referring to was none other than Joel Chan.

Christine only responded over the phone, “I have never explicitly mouthed any names. You guys are free to guess whatever you like. I was just passively ending a relation in the name of friendship. Even if I’m unhappy, it will only just be for a short while. When your affinity with that person has ended then just let go, it’s okay! Making a friend is actually as good as taking a bus. Along the way, some would enter and some would exit the bus. If he wants to exit the bus, then by all means, go ahead!”

Christine then continued, “Some would eventually want to board that bus again after many years but they wouldn’t have the opportunity to re-enter that bus because I wouldn’t open the door for them ever again! Weibo is actually like Victoria Park [a famous park in Hong Kong which was named after the late Queen Victoria of the United Kingdom] in a way that it lets people release their emotions. My younger god sister, Sharon, was also just reliving her fury and not using this for any form of self-promotion.” Florinda Ho: I don’t know what had happened

Yesterday, after hearing the reporter’s portrayal of the matter, Florinda Ho was asked whether she was worried that people would instinctively associate her boyfriend Joel Chan with that said person Christine Ng was referring to.

In reply to this, Florinda said, “I don’t know what had actually happened. Furthermore, people didn’t even name any names. However, I absolutely trust that Joel is a very good person with regards to this matter. I do not believe that Joel would do anything to upset anyone or did matters to make anyone angry.”

In other news, Florinda also uploaded a photo of her and Joel celebrating his birthday in matching couple outfits at around 9PM last night. The development of Christine Ng’s chagrin

Christine Ng, who was initially in happy spirits after viewing some spectacular fireworks display, left a message wishing Joel Chan a happy birthday.

However, five hours later, Christine went ballistic, angrily exposing that a friend of hers had called her up and told her that he didn’t want to hang around with her anymore.

That shockingly revelation incensed Christine who retorted that she was thereby announcing of her breaking off ties with that said person, which in turn gathered her many strong support from friends.